Well…it has been a month since my last post. We just got back from a 3 week trip to Ohio. We visited with family and friends, completed some business we needed to do, and spent most of the time at our house at Lake Erie doing maintenance. We thought we were going to escape the heat of North Carolina, but for all but one week, it was as hot up there as it is here. Even worse, we don’t have air conditioning in our house at the lake! The time went so fast, and as usual, it was great to spend time with family and friends.

With 2 years of living on the boat under our belt, we once again found it difficult to cope with the insanity on the roads. Since June, we have our Jeep Wrangler here in Southport, so we are driving more this summer than we normally do. Most of the driving is within 10 miles of the marina, and it is in our small town here in Southport or the local beach communities. We are certainly not used to driving in the world of highways and hordes of traffic, and I don’t think I ever will get used to it again. It is insane!!! How did we ever do it every day? The biggest difference we notice is that people on the road have become terrible drivers…worse than we ever remember. There seems to be so many distractions to drivers, because there are so many people that are weaving around or going fast, then slow, then fast. It is just crazy. There is also a drastic increase in the number of people that just don’t seem to care if there is anyone else on the road. They hog lanes, pull out in front of you, refuse to use turn signals, sit at lights that are green…it just goes on and on. I think it has been getting worse and worse over the years, but if you drive in it every day, you don’t notice how drastic the difference is. We see it, and it makes me even more glad that we have minimal exposure to it.

Our time up north was cut short by a few days due to the tropical storm threats that have cropped up in the last couple of weeks. We had 2 threatening to impact the Southport area, one off of the coast of North Carolina that was once forecast to be a direct landing yesterday, and the storm that has moved into the Gulf of Mexico and is forecast to pass very near to us in the next several days. We high-tailed it back to try to be here when they hit. The first one turned north and east, and had no impact. The second is still threatening. They are predicting winds in the 40 and 50 knot range, and over 10 inches of rain through Friday and into Saturday. People are prepping their boats, and so are we. We don’t have too much to do for that strength of wind…only to tie down some stuff on the dock, on deck, and in the cockpit. Here is the latest predicted path from the National Weather Service: 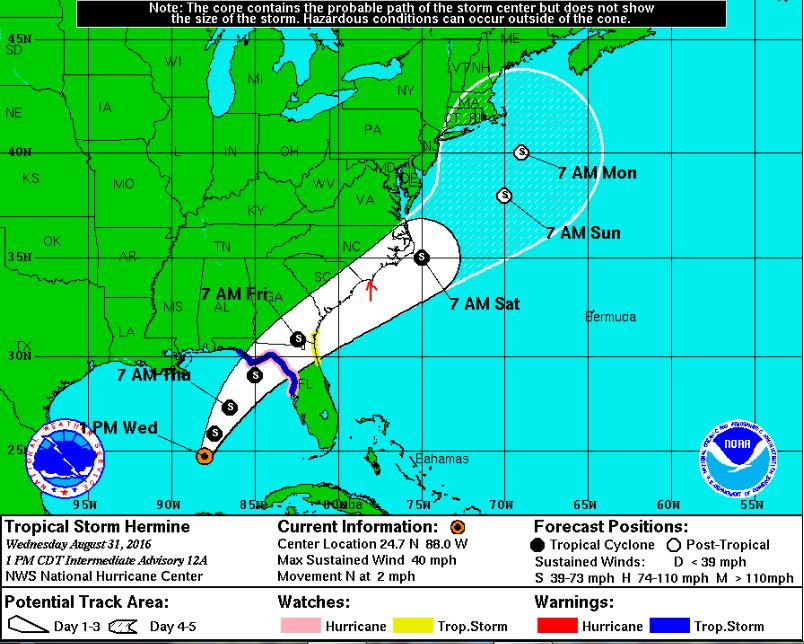 The red arrow shows where we are. Our friends here are already starting a “Tropical Storm Party” plan…can’t miss an opportunity to throw a party!!! Stay tuned.

One thought on “People drive like crap, and prepping for tropical storms”