There has been a lot going on since the last post. A couple of weeks ago, we along with Matt and Shirley on Sofia Jeanne, and John on Annali, took our boats south to Myrtle Beach to watch the eclipse. Myrtle Beach was in the 99% viewing zone. We stopped first at Myrtle Beach Yacht Club in the North Myrtle Beach area. We had never rented a slip there before. Really nice people, and a nice pool! We came in with winds over 20 knots and a strong thunderstorm closing in. The wind caught us when we turned into the slip and a concrete pier clipped the wind generator pole and dinghy. Dinghy was fine, but the wind generator pole got jacked up…nothing serious, mostly just embarrassing! We didn’t get to enjoy the pool because all hell broke loose with the storm, but we checked out some local dining options. The next day we went to Barefoot Landing and proceeded to have an two day eclipse party. It was fun. 20 minutes before the eclipse started, a giant black cloud moved in over us and it didn’t leave until 20 minutes past the eclipse…lol! Oh well, we still had a good time and a good party.

Those who know me, know that I am a weather geek/fanatic. Weather fascinates me, and during hurricane season I watch every tropical disturbance, no matter the probability of becoming a storm. When Irma was approaching the Leeward Islands in the Caribbean, it was first forecast to come directly into the Cape Fear River inlet, which is where Southport (our home) is. The path shifted around a bit for a week, but we were still in the “cone of uncertainty”, which means we could get our asses kicked. Last Thursday and Friday had very calm winds and we were still in the cone, so we took the sails off the boat in preparation for the worst. The storm wasn’t supposed to hit us until Monday (today), so I delayed taking all of the canvas off, stowing the dinghy, and all of the other prep. 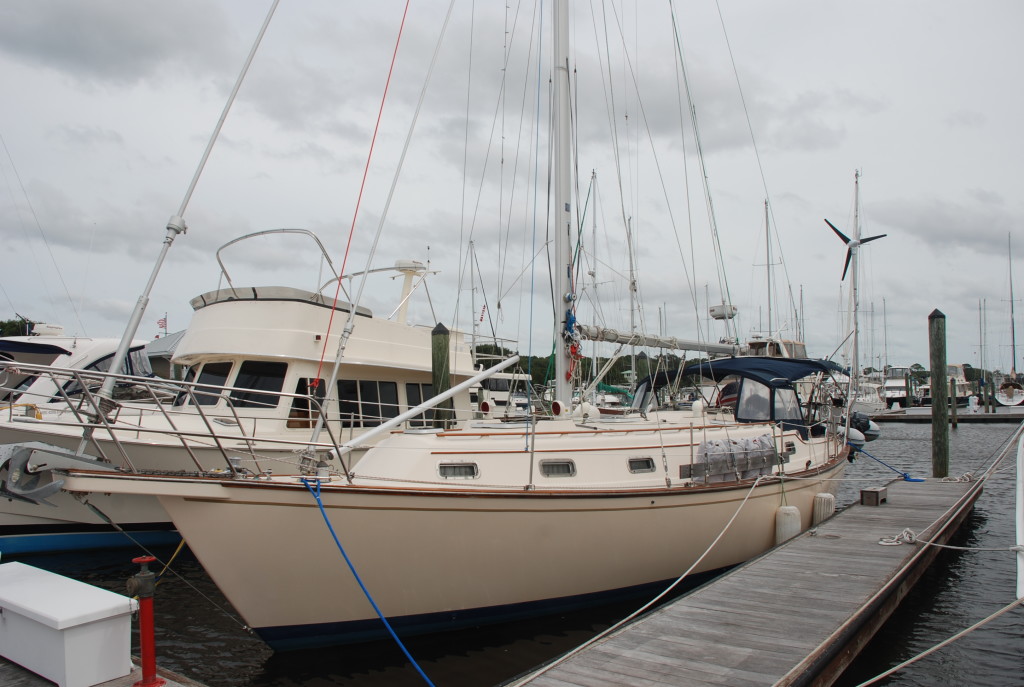 On Saturday, the path shifted far enough away from us that we were not in the cone, and all of the forecast models were starting to show the same path. Winds were only supposed to be in the high 30 knot range (mid 40s MPH), and we have been through plenty of that type of weather, so we decided to leave the dinghy and canvas on. It has been blowing from the mid-20s to the mid-30s today, and just a little rain so far. We have many friends in Florida and feel terrible for everyone that is suffering from the devastation. We are hearing that many of the places that we cruise to each year have sustained severe damage. One friend in Marathon posted that Boot Key Harbor has been devastated and half the boats are gone (there are several hundred moorings in there). This is the mooring field that we stay at, and is the place where the locals take their boats for hurricanes. Our hearts go out to those that have been affected. We are so fortunate to have been spared the brunt of Irma.

As far as the house goes…work continues on the inside. Almost all of the walls are now covered. In keeping with the historic time period that the houses in our neighborhood were built, we are doing ship-lap wood walls, which takes much more time than sheet rock. It also generates lots of nail holes, which Tricia and I have been covering with putty. We have used over 9 thousand nails on the walls so far, so we have our work cut out for us! We also have many “built-ins” that take quite a bit of time, and we still have a couple of months to go until the house is done…still shooting for November. Here is the latest round of pics:
Master bedroom: 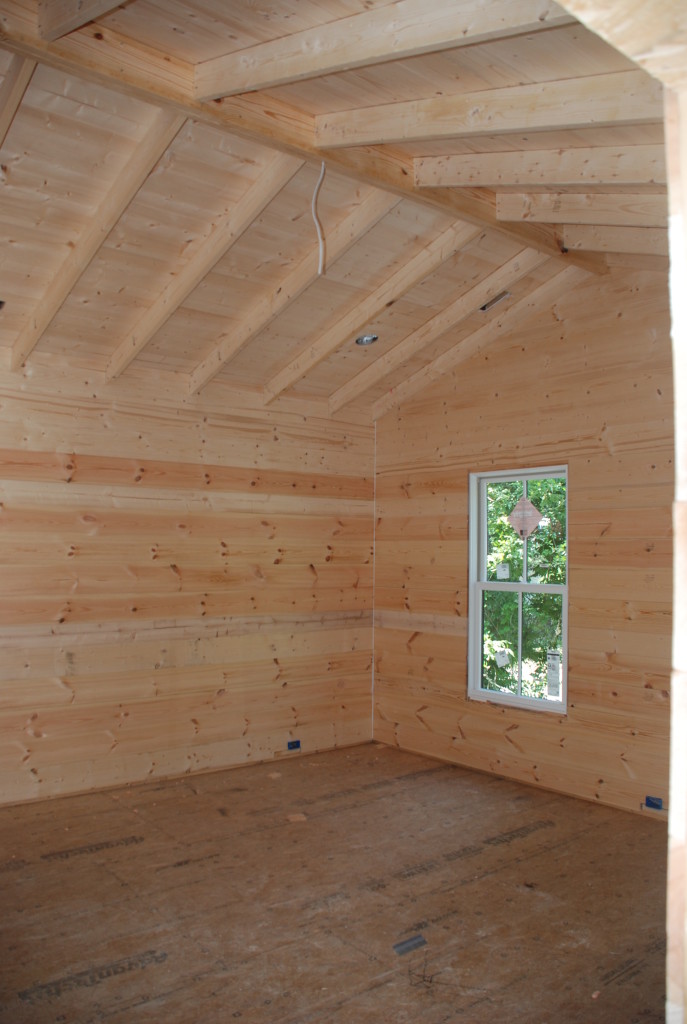 Entry way and partial living room. The opening on the far right side of the picture is an office area that will have sliding doors hiding all of the mess: 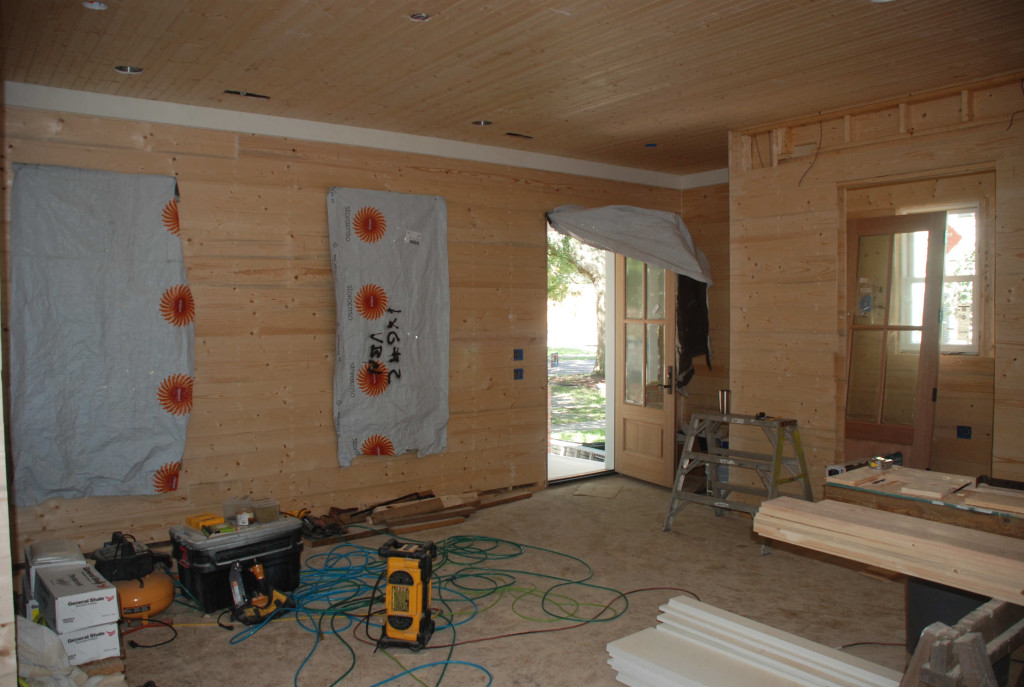 Built-in above the fireplace for a TV: 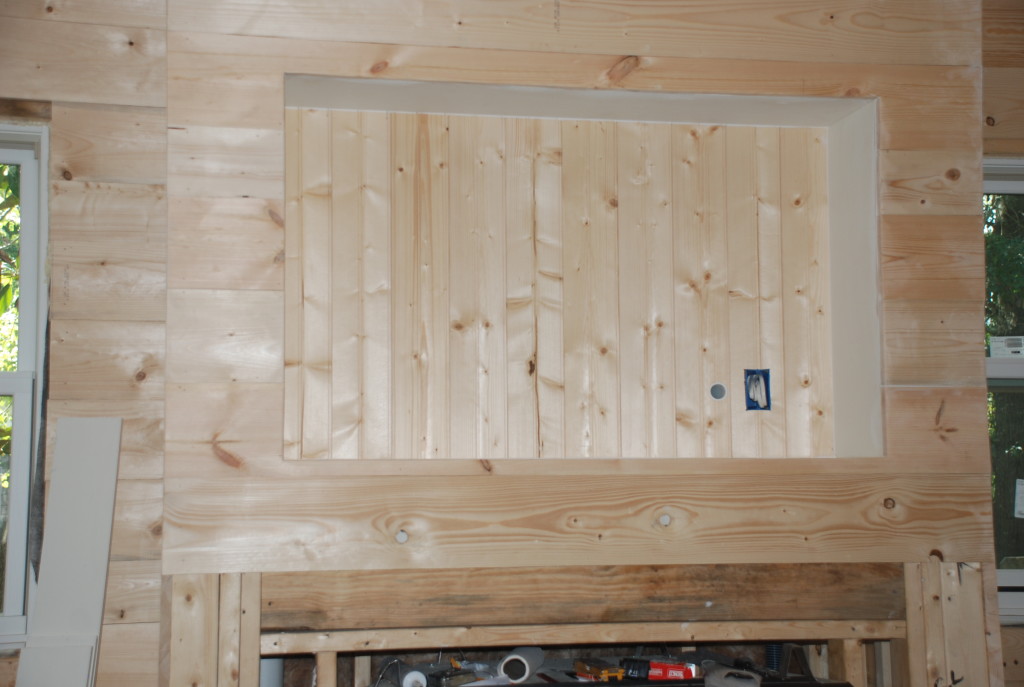 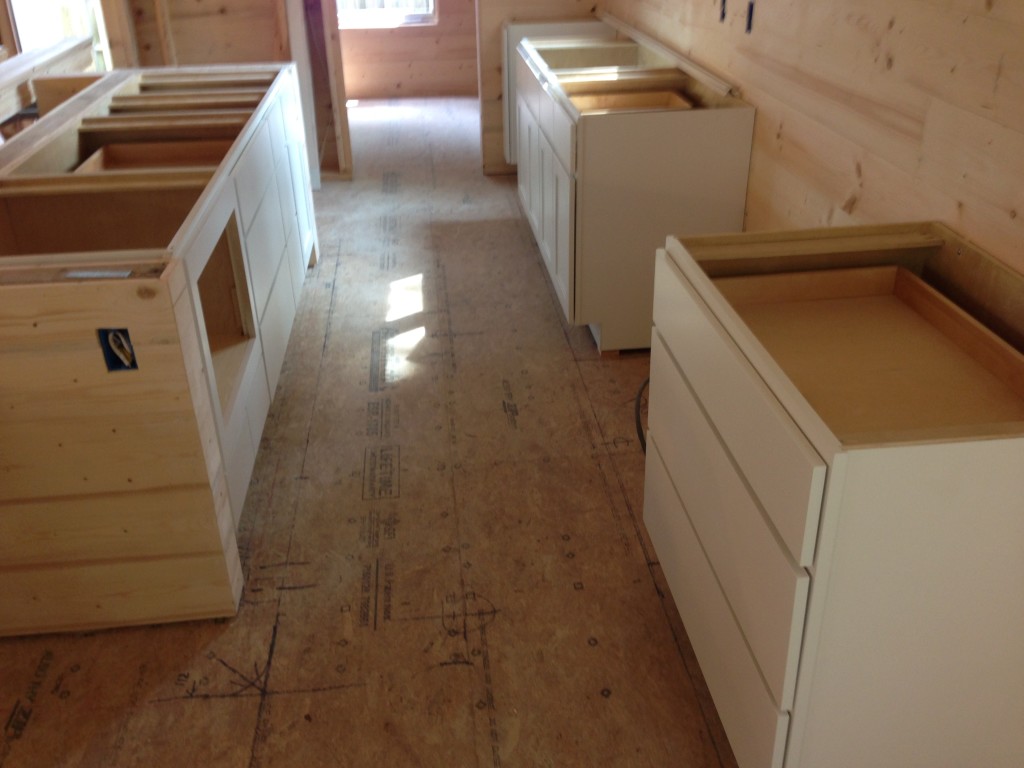 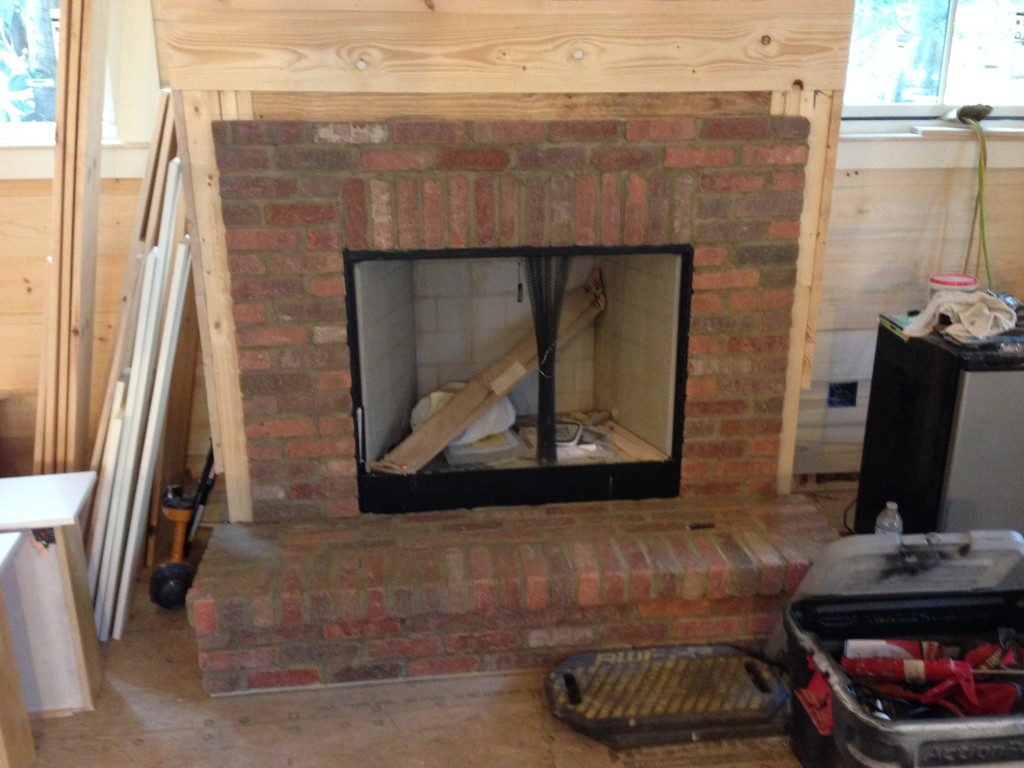 A few weeks ago we hauled the boat and had the bottom painted. It had been 3 1/2 years since the last paint job and it was badly needed. I waxed the hull and did some below the waterline maintenance while she was out.
Slime bottom at haulout: 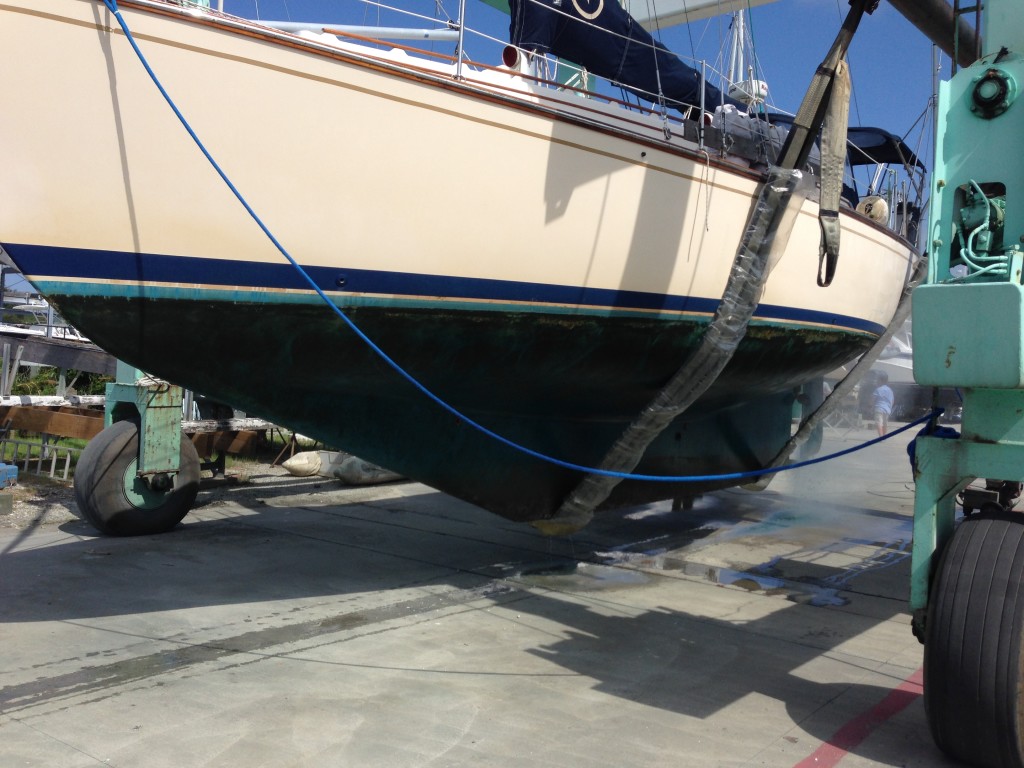 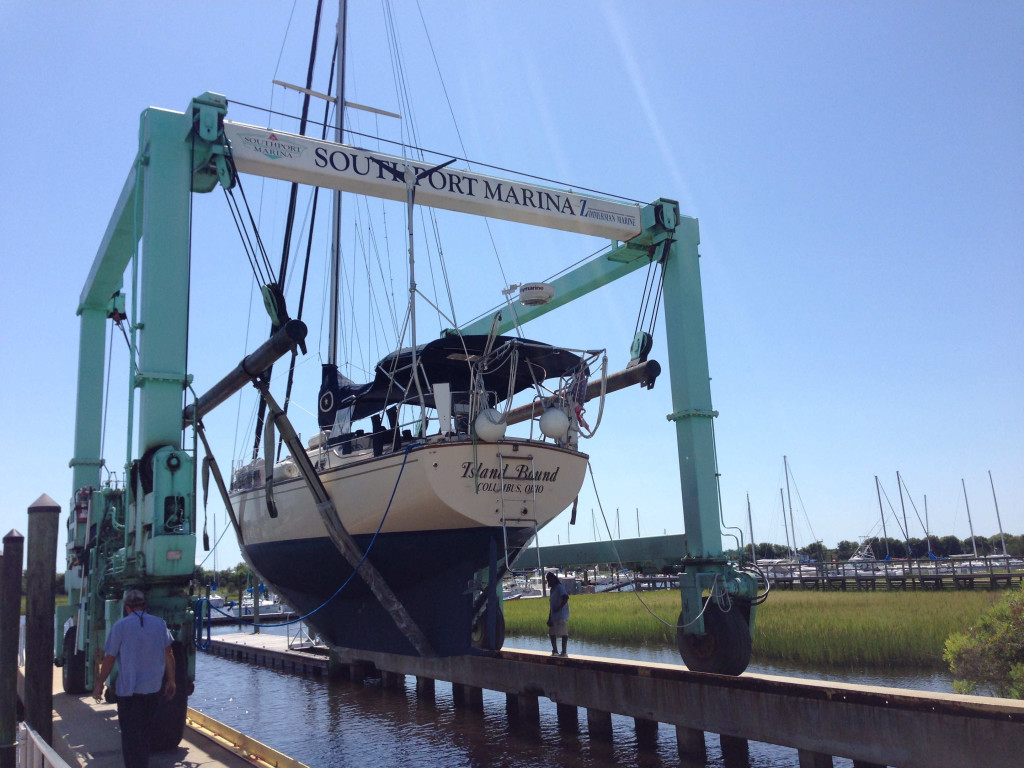 While working in the boat yard, we had a visitor crawling out from under the boat: 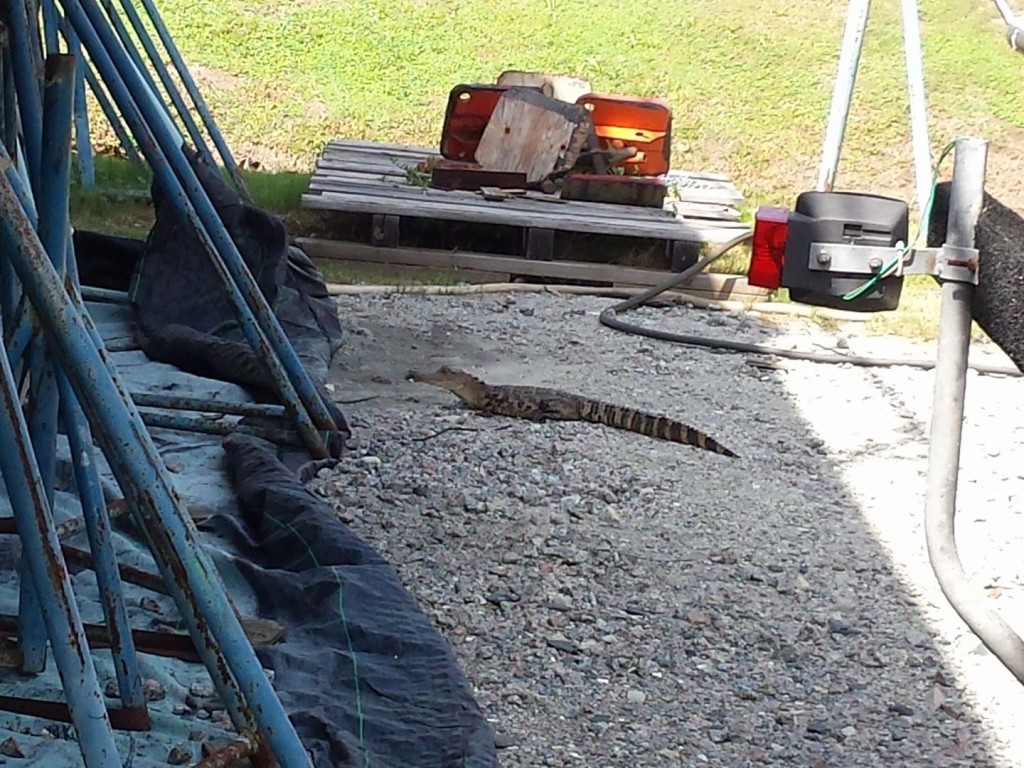