It looks like Florence has tampered with our departure plans. For those we have not spoken with, we decided to weather the storm here in Southport. No problems with the house or the boat…thank God, but it was a crazy couple of weeks for us.

We prepared early two weeks ahead of the storm getting bottled water and making lots of ice and food. A week before the storm we prepped the boat: all sails off, dodger off, bimini off, solar panels off, secured wind generator, doubled all lines and added fire house at chafe points, capped and taped dorade openings, taped all vents, taped electronics, taped lockers, and sealed the companion way hatch with duct tape. This took several days. We also removed our Engle portable refrigerator/freezer, 5 gallon water jugs, Honda generator, gasoline jugs, solar showers, and dinghy, and took it all to the house. At the house we secured everything on the outside or brought it in, took down the gas lantern, filled bath tubs with water for flushing toilets in case we lost water, filled 5 gallon jugs with water for drinking/cooking, bought 20 gallons of fuel in jugs for the generator, and made sure all of the flashlights had fresh batteries.

The storm hit Friday (9/14). Thankfully, it hit north of us at Wrightsville beach, and we got the better side of the storm. Areas north of there got the bad side. Unfortunately, the storm stalled to a crawl and punished us for 3 days. We lost power at 7:15 Saturday morning. Our neighbor has a whole house generator and offered room in one of his refrigerators and to plug an extension cord into an outside outlet. We powered the Engle, our internet modem, wifi router, and charging for all phones, computers, and tablets. Tricia had a great setup for our house refrigerator and freezer, using the ice blocks we made to keep them cold, and re-freezing them in the Engle. The internet went out with the power, but we could use our cellular connections for all but one day of the outage period. The public water mains were compromised and we lost water Sunday morning. The eye wall of the hurricane came through about a mile north of us on Saturday and we were getting gusts that shook the entire house and many more that shook the bed. Amazingly, they had power restored early Monday afternoon.

All roads out of Southport had bridges washed out or were flooded. We had plans to go to our niece’s wedding on 9/22 in Dayton Ohio, but weren’t sure we could get out in time. Tuesday, some friends on our dock came from Winston-Salem and told us how to get around all of the road closures, but the rivers were going to crest and cause more closures. We cleaned up all of the yard debris in our yard and in most of the neighbors yards around us, and decided to head out to get to the wedding. We left Wednesday morning, just as the water was restored, attended the wedding (congrats to Anna and Andrew…a fantastic wedding!), visited family and got back to Southport on the 28th, just as the water boiling alert was lifted. It still looks like a war zone in Southport, and there are several roads blocked due to sink holes developing from the large amounts of rain. We got more than 30″ of rain from the storm, had a meager storm surge of around 3 feet, and had winds over 100 MPH. I have never seen it rain like it did!

Hats off to the all of the authorities, governments at all levels, and especially the work crews. They did a fantastic job of getting utilities and roads back in order. I feel for the people who are still dealing with flooding…it looks awful.

Our experience as cruising sailors helped us be comfortable during this ordeal. Having a portable freezer, portable generator, water jugs, gas jugs and solar showers, really helped. Now we have to put everything back together and try to get ready to leave. Our original plan was to leave 10/15. We lost several weeks of prep time to the storm and wedding, and the ICW (Intracoastal Waterway) is shut down between Little River and Winyah Bay until 10/19, so we will not be able to leave as planned. We will re-evaluate in a week or so and keep you posted.

Island Bound ready for the storm:

Flooding on West Street at the neighbors house: 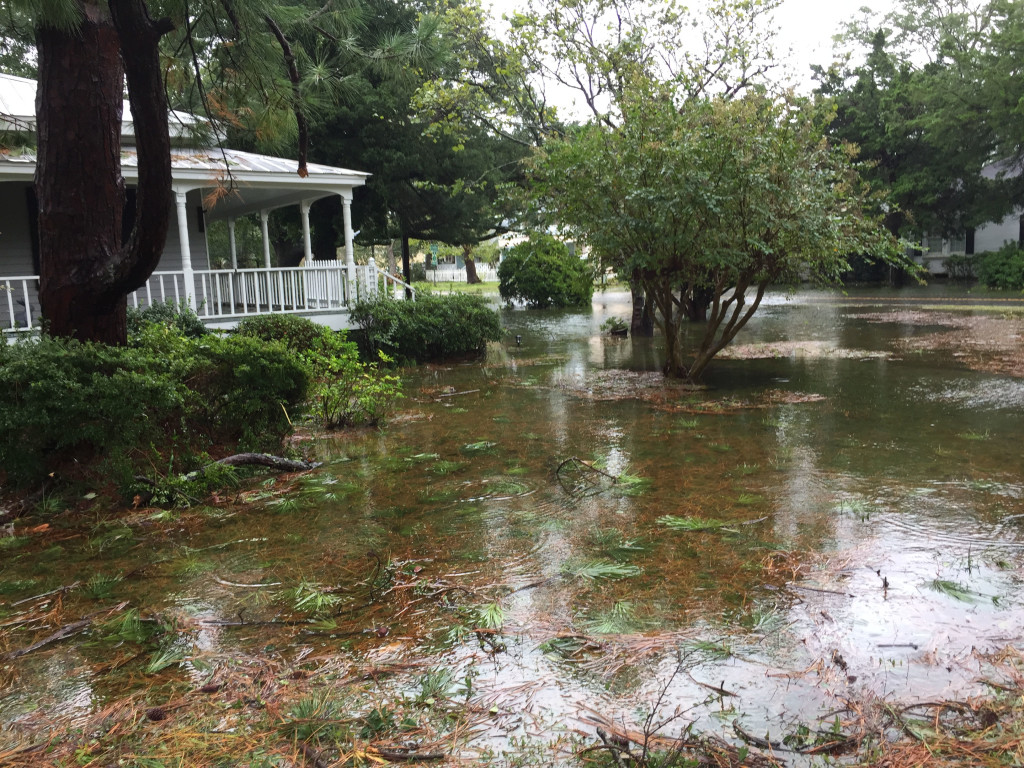 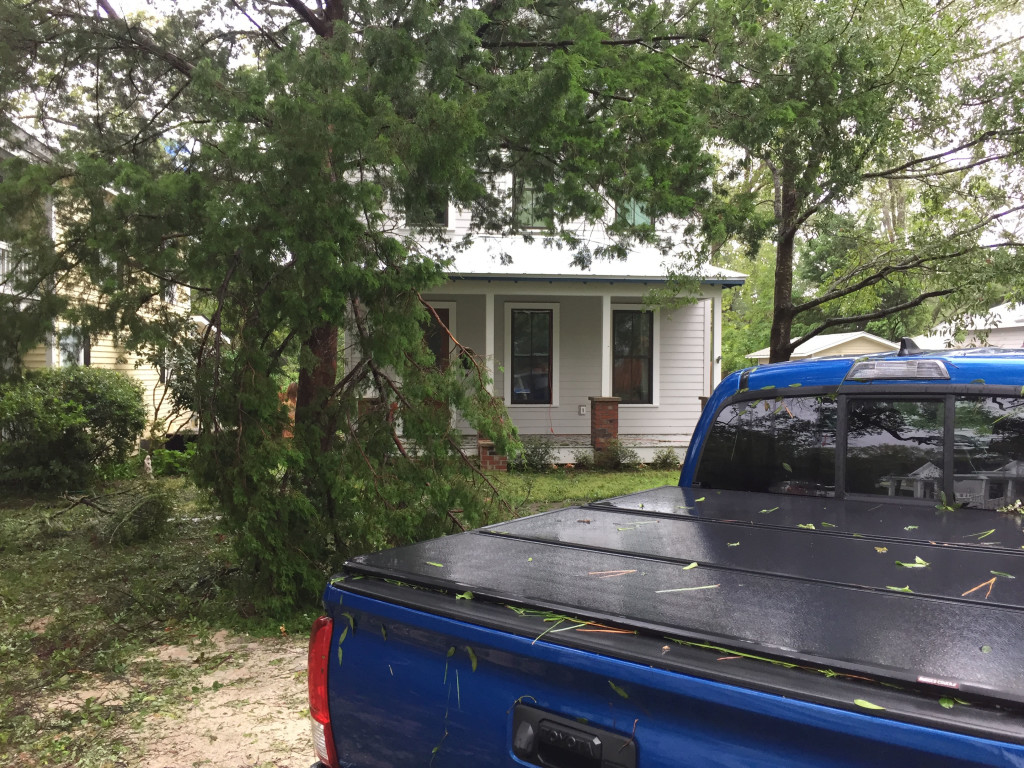