Well…this has been the longest stretch of time between posts since we started cruising. A lot has been happening, but not much to report about from a cruising perspective. As we do each summer, we have settled into life in Southport, and we have been enjoying the lifestyle living here…a few trips to the beach (although we thought we would go there more than we have), taking the boat to Carolina Beach for several days, taking the dinghy to the sandbar/low tide island, participating in the Stede Bonnet pirate sailing regatta…etc…

In addition to that, we attended a wedding in Maryland and went back to Ohio for a few days to winterize our house at Lake Erie (which is for sale if anyone is interested…it just isn’t being used enough to justify keeping it). The balance of the time we have spent dealing with the building of the house here in Southport, which is about a month from being completed. We noticed that we are going through a transition from cruising to dirt dwelling.

Many people write about this transition, and most find it more difficult than going from dirt dwelling to cruising/live aboard. For us…at least for now…it is a bit different, since we are not giving up totally on cruising, but plan on many more years of partial year cruising. Believe me, this helps. We have decided not to go south this winter, and take a season off. After over 3 years of traveling and living aboard, it will be nice to have the comforts of a house for a period of time. We would normally leave November 1st, and we see the transient boat traffic moving through and past the marina, making their way south. In addition, most of our friends that we met cruising, are either moving or getting ready to go. A big part of us is wishing we where going, especially when we have a couple of mornings like the last 2, where temps are below 50 degrees (not normal for here). We have been living in summer conditions for 3 1/2 years, and it will be difficult for me to deal with even the mild winter of Southport! I hate being cold!!

The transition to dirt dwelling has been interesting. For us, it started with having a car. Last summer we brought our 1994 Jeep Wrangler to Southport. After having lived here the first summer borrowing cars or riding bikes in less than desirable traffic, we realized we needed our own wheels if we were going to “park” ourselves again for a full summer. The Jeep is in good shape and is great for running around Southport/Oak Island, but it is not great for longer trips, like Wilmington or Myrtle Beach. Certainly not good for anything over a couple of hours. Having the Jeep gave us the ability to live what most would consider a more “normal” lifestyle here. We got used to driving again, which is a big transition! This year, when we decided to build the house, we figured we had better get a more practical vehicle, and bought a new Toyota Tacoma (I missed my Tundra the last couple of years…lol). This has given us more range of travel, not to mention, air conditioning…a must for summers here…and something the Jeep does not have. The introduction of each vehicle has enabled a further transition away from a true cruising lifestyle. We spend more and more time away from the dock with each transition, and working on the house as much as we have, has also resulted in less time at the water. This results in less time doing the things that we enjoyed so much in our transition to cruising…like sitting at the end of the dock each night to watch the dolphins and pelicans and watching the sunset EVERY day. Our focus and attention has shifted from nature based to mankind based. Fortunately, the boat will only be a 10 minute walk from the house, and once we get through building, I expect we will have more time to keep in tune with the natural world around us. This was one of the most stark revelations when we started cruising. In “normal” life, we spent so much time and attention to man made life, and so little time was spent immersed in the natural world. Immersion in the natural world has its challenges, but is so much better than man made, and most of the people in the US will never gain the experience to know the extent of the difference. I never want to lose sight of that again. Our transition has been gradual, but many just up and quit cruising…sell the boat and move back on land. For them, the transition is much more challenging, and I can see why so many people struggle with it.

As for the house…we are getting close. Since the last blog post, the walls are completed, the inside has been painted, we have gone through one iteration of fixing knot holes and imperfections in the wood walls, the counter tops are installed, the bathrooms have been tiled, the lot has been graded, and bushes have been planted. A brick walkway to the back of the house, and patio is being installed this week, as well as the wood floors. Appliances are on order. After the floors, the final electrical and plumbing work is completed, and we will be ready to move in. We promised our family members that we would post pictures during construction, but I want to wait a few more weeks before we post any more.

Transitions can be difficult, but at least ours has been gradual, and we are transitioning in a fantastic place to live! We absolutely love it here!!!

Here we were, anchored at Carolina Beach: 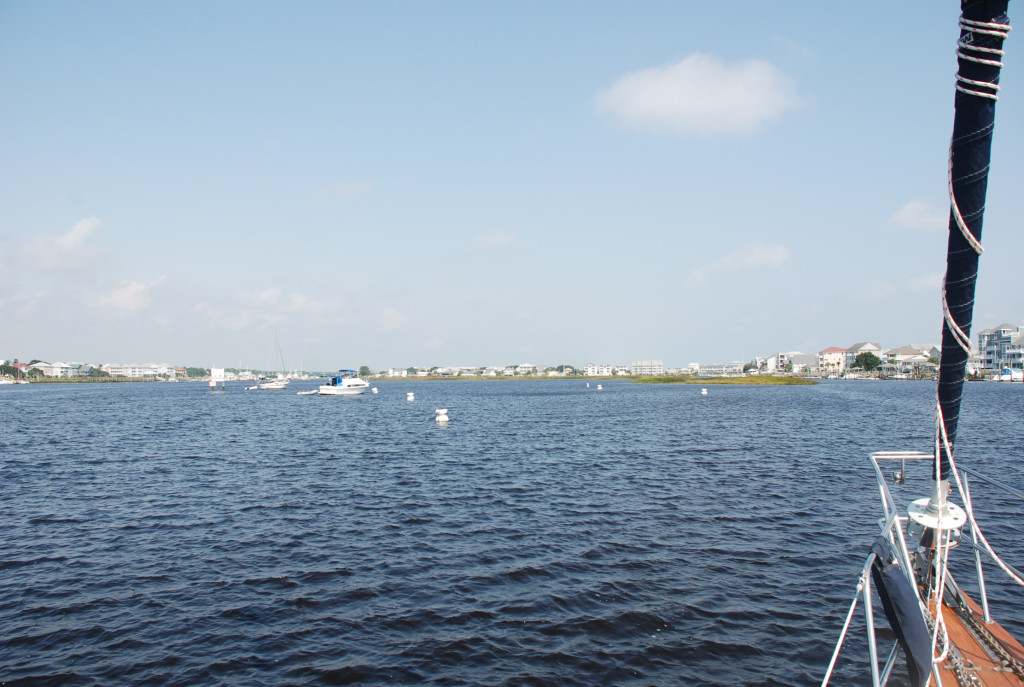 Note about the older blog posts:
I noticed that blog posts from 2014 up to 2016 have lost the links to the photos. During the first years, I tried to save money and use a free photo site to store the pics. They have since removed the ability to directly link to the pictures via a URL, thus breaking the link to the blog. Maybe over the winter I will have the time to fix those link errors. I do have each month of posts saved in printed format in PDF files. If anyone would like to see those posts with pictures, just contact me and I will send the files to you.