If you follow our blog, I am sure you are wondering what we are doing in Bimini already. We normally stay in the Bahamas until the first week in May. A lot has been happening, but I will summarize by saying that we have had family medical issues crop up that we felt we needed to get back to the States to be able to attend to if they worsened. Couple that with rough weather and ass kickings, and various issues that our travel mates are dealing with, and we just weren’t having that good of a time in the Bahamas and decided to head back. We are looking to cross over to Lake Worth, FL on Thursday as long as the weather holds, and then we will take our time getting back to Southport unless the family medical issues worsen, at which point we will beat it back home or leave the boat somewhere secure for a period of time.

To catch you up on our whereabouts….we left the blog when we were in Emerald Bay Marina on Great Exuma. On 3/21 we sailed down to Georgetown and anchored off Volleyball Beach and the Chat ‘n Chill in Elisabeth Harbor at position 23 31.096N, 075 45.526W. Having been there before, we showed our travel mates the ropes (so to speak). We visited Chat ‘n Chill, St Frances restaurant and bar, went to Georgetown a few times for groceries, liquor, and boat parts; and also hit some restaurants. One of the highlights was a great happy hour at Augusta Bay resort across the harbor. They have a great bar there and the people are really friendly. They had 2 for 1 rum and Cokes that were mostly rum…2 for 5$ is a major bargain in the Bahamas! On 3/26 we had a good window to return up the Exuma chain and made our way back to Blackpoint, anchoring in position 24 06.198N, 076 24.174W. We waited out several days of high winds, including a day and night of northwest winds (not forecasted from that direction) that rocked us pretty badly. Of course we took advantage of the rum punch specials at Scorpios happy hour while we were there! We were treated to a couple of good sunsets during our stay: 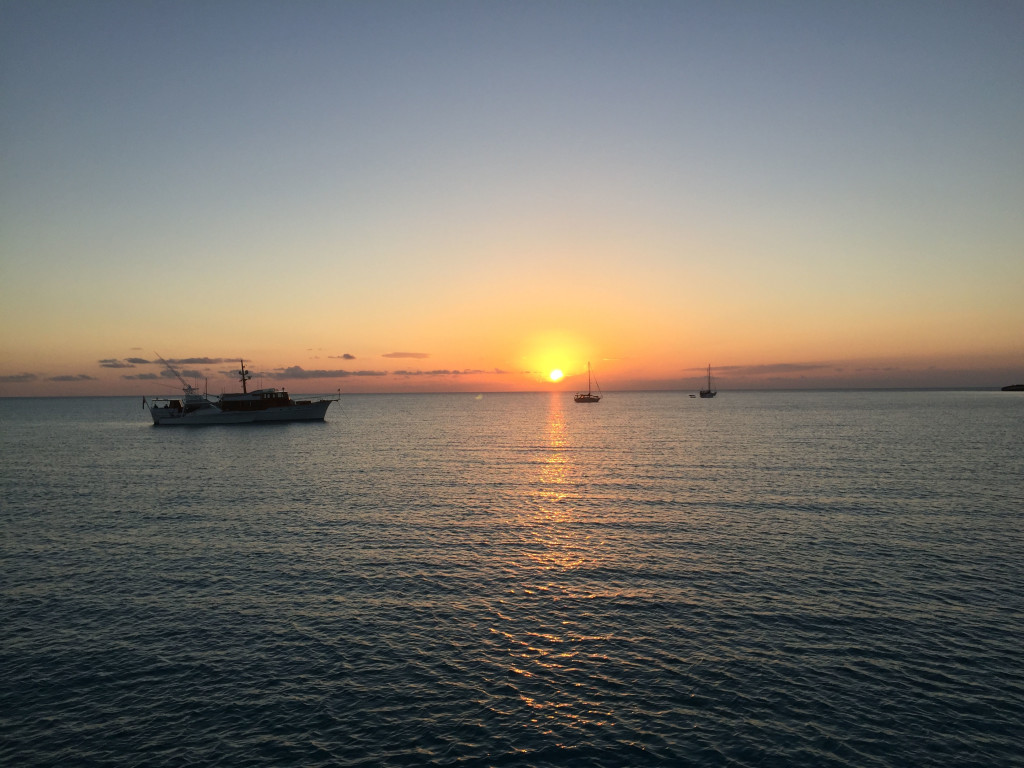 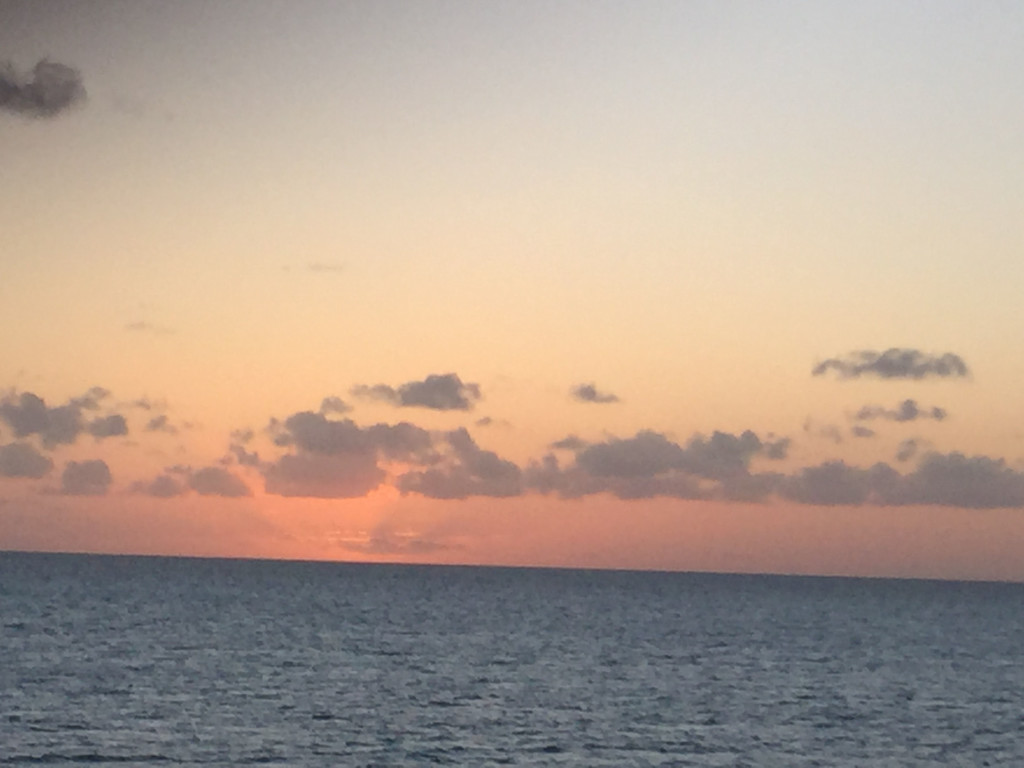 And a view of the anchorage from shore: 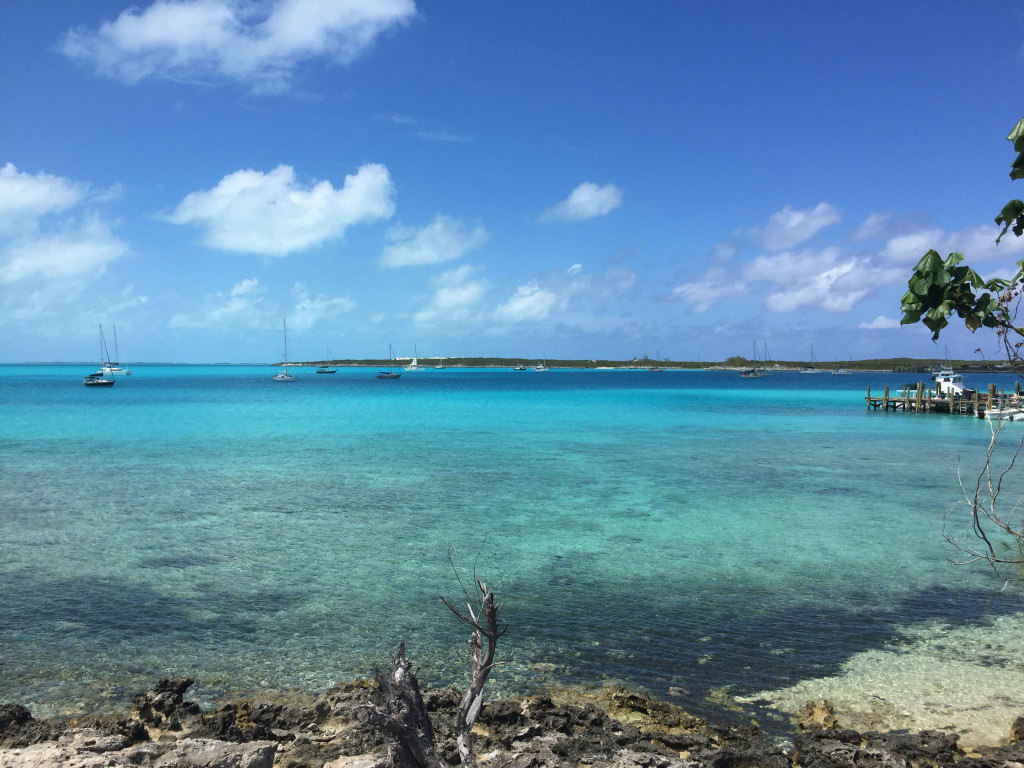 The winds died for a day, so on 4/1 we anchored off Staniel Cay Yacht Club and took Larry’s boat to the fuel dock. After fueling, we moved back to Sampson Cay, probably our favorite anchorage in the Exumas, and had the inside anchorage to ourselves, anchoring in position 24 12.558N, 076 28.527W. On the way down this place was packed with boats but this time we had only a few other boats come in and anchor outside of the area we like the best. We waited out high winds again for a few days, but we were able to dinghy into Pipe Creek and Over Yonder Cay and enjoy the stunning views in that area. We also enjoyed secluded reef snorkeling and secluded wallowing at several beaches and the sand flats behind the anchorage. These are the reasons we love the Exumas, unfortunately, it is very difficult to find any more. Too many people cruising the area and way too many mega-yachts.
Having decided to make our way back home, we were looking for a suitable weather window. It looked like we had a decent 3 day window of east winds and waves, and weather we could sail and not get our asses kicked, so on 4/4 we moved up to Normans Cay to stage our crossing back to Bimini. It was a really windy day, but we were mostly in the lee of the weather and it wasn’t too bad. We anchored in position 24 36.181N, 076 49.203W. The next day we left and crossed the banks to New Providence Island (where Nassau is). Consistent with just about every other day, the forecasted winds and wave heights were not correct, and we took a beating in quartering waves. We had decided to try a new to us anchorage on the northwest corner of New Providence called Old Fort Bay. The 3 Active Captain reviews that we found suggested that it was better than West Bay which can have bad holding and a bad swell. The anchorage was really pretty. We found that a large portion of the area that is charted at 12 feet is actually less than 5, the first time we have found the Explorer charts to be incorrect in the Bahamas. The anchorage was subject to a bad swell, worse in some areas than others, and we found a spot that wasn’t too bad, until the tide shifted in the middle of the night and slammed us around all night. On the positive side….we did have a great sunset: 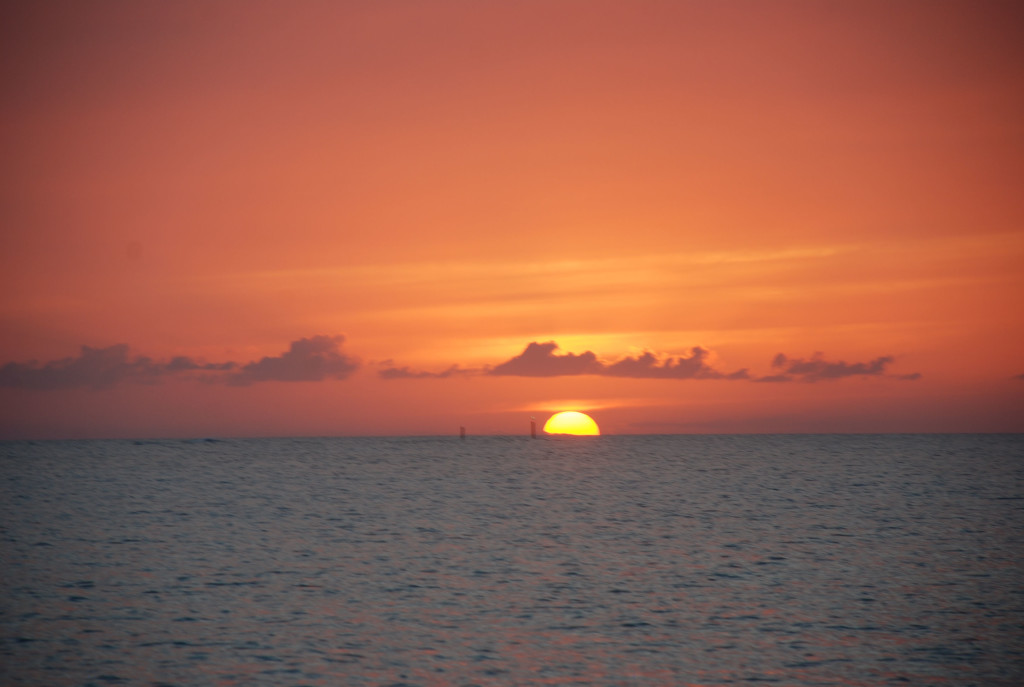 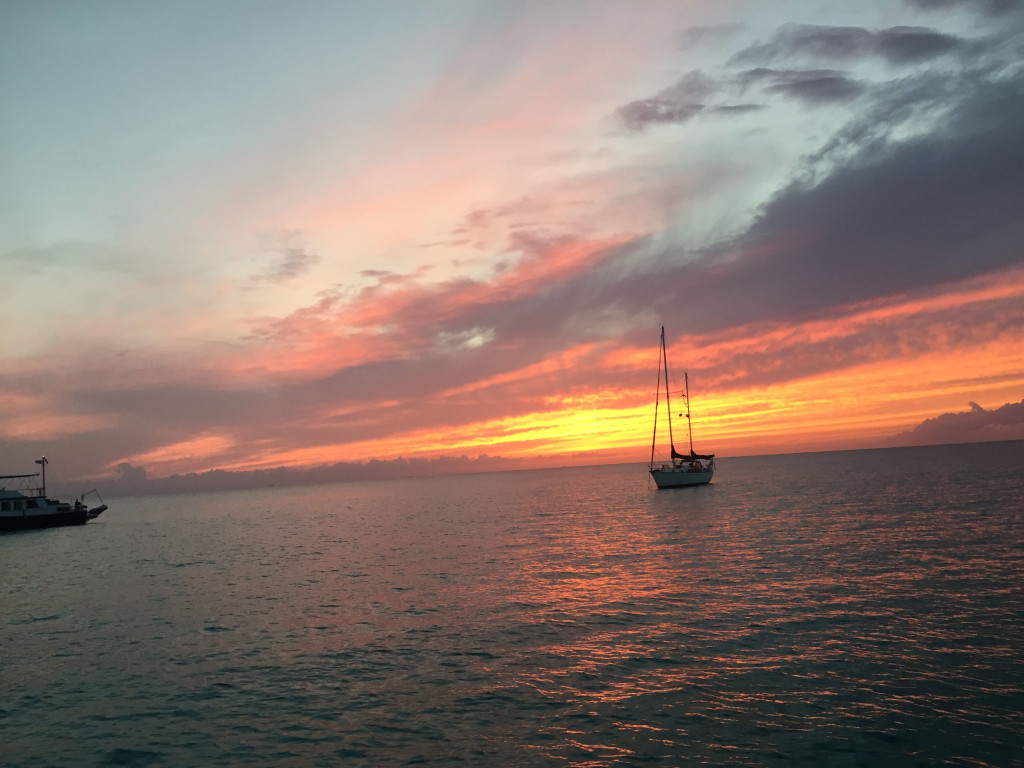 The next day we left, wishful that the forecast was more accurate, but to no avail the winds were higher and coming from the northeast instead of east, meaning beam seas…yuk. The first half of the trip to the Northwest Channel was really rough and uncomfortable, but the second half was pretty close to forecast. We traversed the channel with ease and went onto the banks to a place called Mackie Shoals…half way across the banks to Bimini. We arrived at Mackie Shoal about an hour after sunset and anchored in position 25 40.735N, 078 41.932W. This is in the middle of nowhere and totally exposed to the open water. We put the hook down to have dinner and to rest a few hours before we moved on. We were expecting 1 ½ foot waves and about an hour after we set the hook we had 3-4 footers slamming the bow of the boat up and down. We have had worse but it was still not fun. In spite of it all, we were exhausted from the trip and slept several hours in the slamming. We upped anchor at 3 AM and started toward Bimini…a 7 hour trip. Because the entrance to Bimini Sands marina has 4.5 feet of water at low tide, and we need at least 5 feet, we had to time it so we didn’t arrive before 7 AM and arrived before 1 PM. Just before first light, Sofia Jeanne clogged a fuel filter and the engine died. Matt replaced the fuel filter but had to prime the fuel system to get running again. To prime, he needed another hand to push the start button while he bled each injector on the engine. Since he was single handed, we all anchored in 4-5 foot seas and he brought the dinghy over to pick one of us up and use our generator (a whole other story) to start the engine. About an hour later we upped anchor and got back underway. It was the first time I have anchored in seas like that and it was crazy…the bow was rising and falling 5 feet at 3 second intervals…sometimes higher…and I thought the windlass was going to rip off the boat as the waves pulled the bow down into the water!!! We survived and managed to make it into Bimini Sands before noon. Once again, the forecast was way off, and thank goodness we had following seas or we would have received another major ass kicking.

One of the other issues we had was related to our electronics. Coming into New Providence, our wind instrumentation stopped working. I had complete redone the connections in Marathon FL months ago. On the trip from New Providence to Mackie Shoals, our GPS was dropping it’s location every 50 minutes or so. We would have to drop power from all of the electronics and restart to get them working again, only to have a repeat situation the entire trip. On the trip from Mackie Shoals to Bimini the GPS worked flawlessly, and now in Bimini the wind instrumentation is working fine too. We are thinking maybe a Bermuda Triangle thing????

2 thoughts on “Heading back to the States”