Another “long time … no blog”, and I have no real excuse. We took the worst of the weather at Sampson Cay and on the 10th the wind died enough to jump to the next anchorage which was at Big Majors Spot, anchoring in position 24 11.261N, 076 27.482W. There is good protection from the east winds we were expecting and we wanted to take our traveling buddy Larry to Pig Beach there since he had never been. We fed the pigs table scraps and they were pretty aggressive! 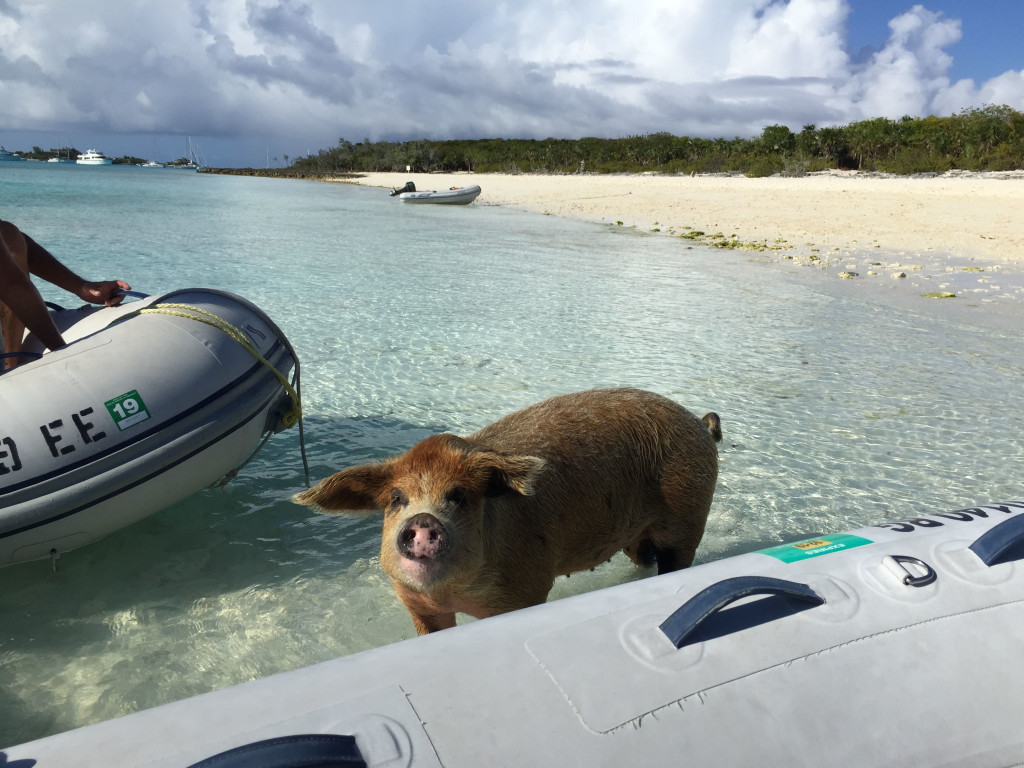 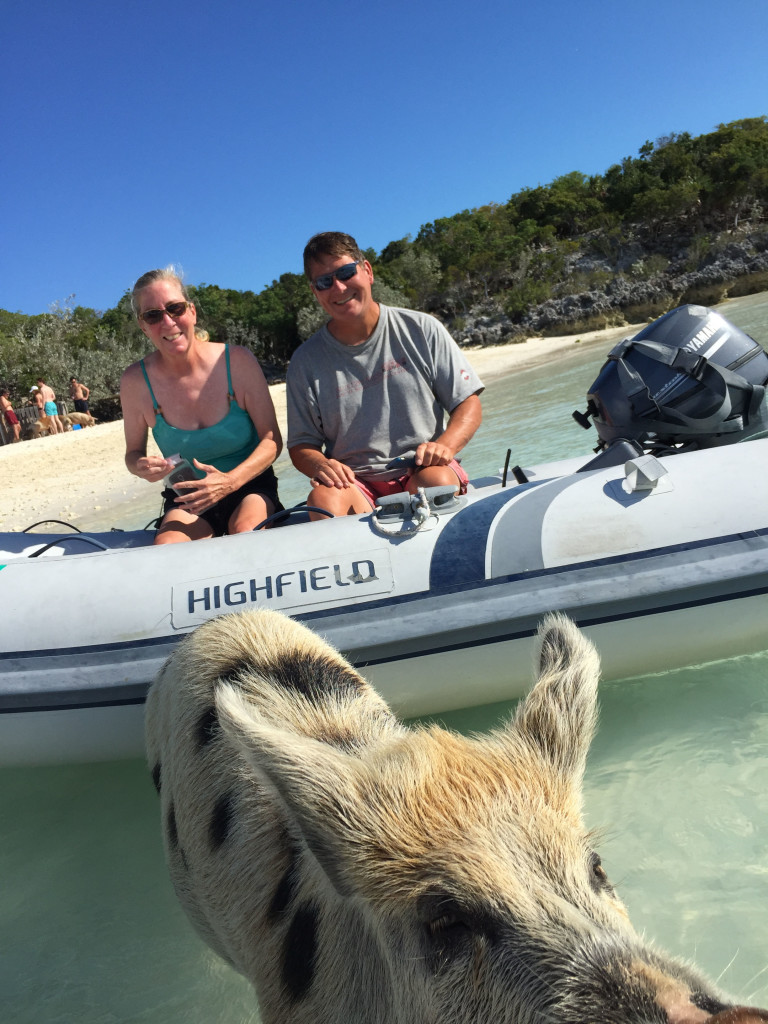 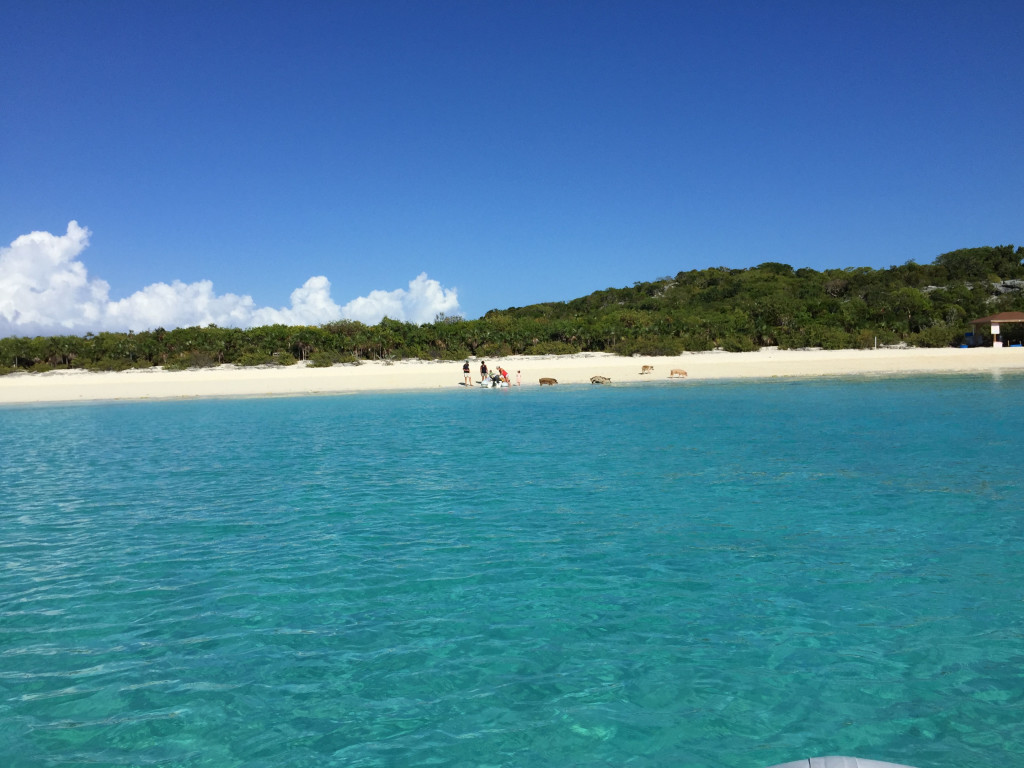 The next day the wind died enough to dinghy over to Staniel Cay and get some gasoline, check out the small grocery stores and have lunch at the Staniel Cay Yacht Club. The Yacht club was not our first choice, but the other two options for lunch did not have any food left when we got there. After a few rum punches and lunch, we headed back to the boats. We did a few sunset happy hours on Larry’s fly bridge and also did a “drink and drift” one evening. “Drink and drift” is where we tie our dinghies together, drink and drift as we watch the sunset.
The Drink and Drift: 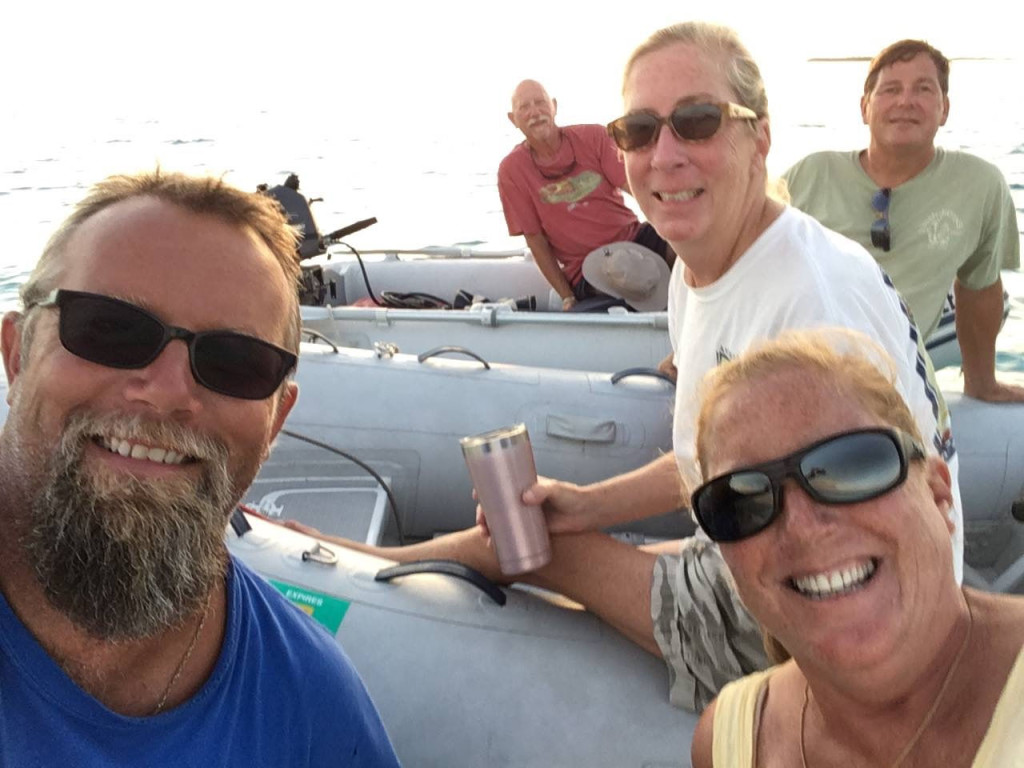 A view from Staniel Cay: 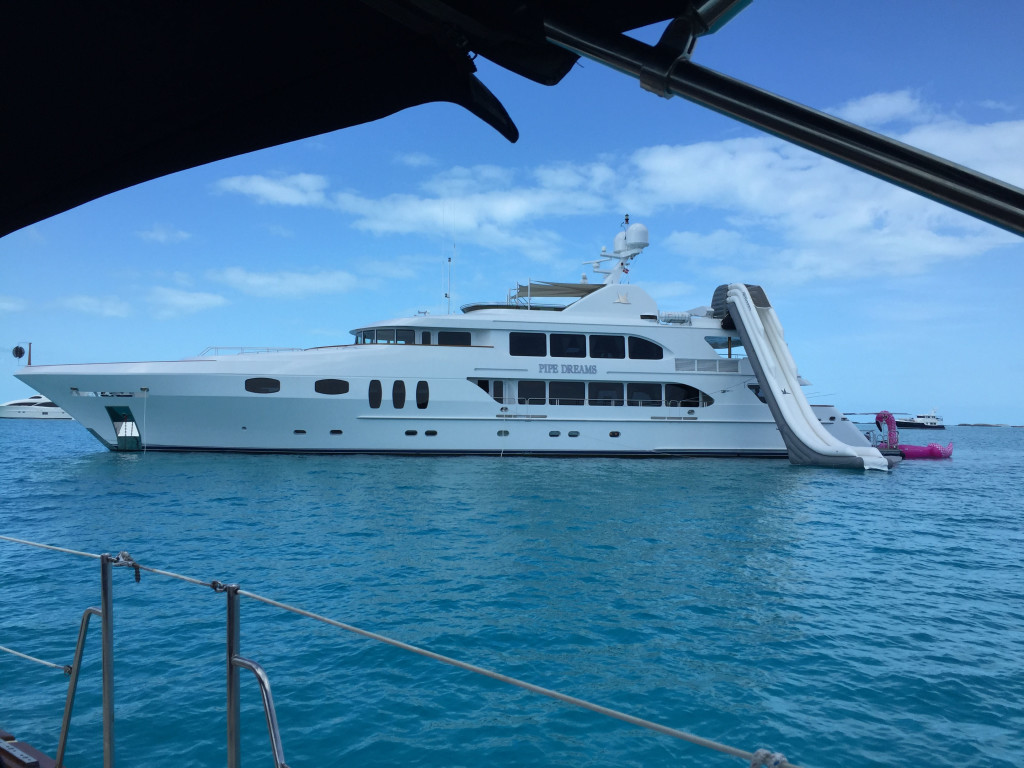 On the 12th we moved on down the cays to Great Guana Cay and the Blackpoint Settlement, anchoring in position 24 06.237N, 076 24.198W. Blackpoint is one of our favorite stops and we took advantage of the protection from north, east and south winds that built up to over 20 knots while we were there. We went to Scorpio’s happy hour 2 days while there and really enjoyed the rum punch special! We ate at Lorraine’s Café 2 nights and were disappointed both times, which surprised us. We usually get good food there. We also went to Deshamons and got pizza one night, which was really good. It was really windy and we didn’t do much else.

We were trying to get down to Emerald Bay Marina on Great Exuma around the 17th because our good friends Bill and Dondi from Southport had booked a room in a resort there so we could all hang out. They were only staying a few days and we were trying to maximize the number of days we could hang together. The weather was not really cooperating, but we built a strategy to move in that direction along the lee side of the cays until we had good enough weather to make an ocean run in Exuma Sound, which was the final leg. On the 15th we moved about 7 miles down Great Guana Cay to an a beautiful secluded beach at a place called White Point, anchoring in position 24 02388N, 076 22.574W. We enjoyed some wallowing on the beach there and all got together for drinks on Larry’s fly bridge. This is the best part of the Exumas…beautiful water, beautiful beaches, and the possibility of seclusion. 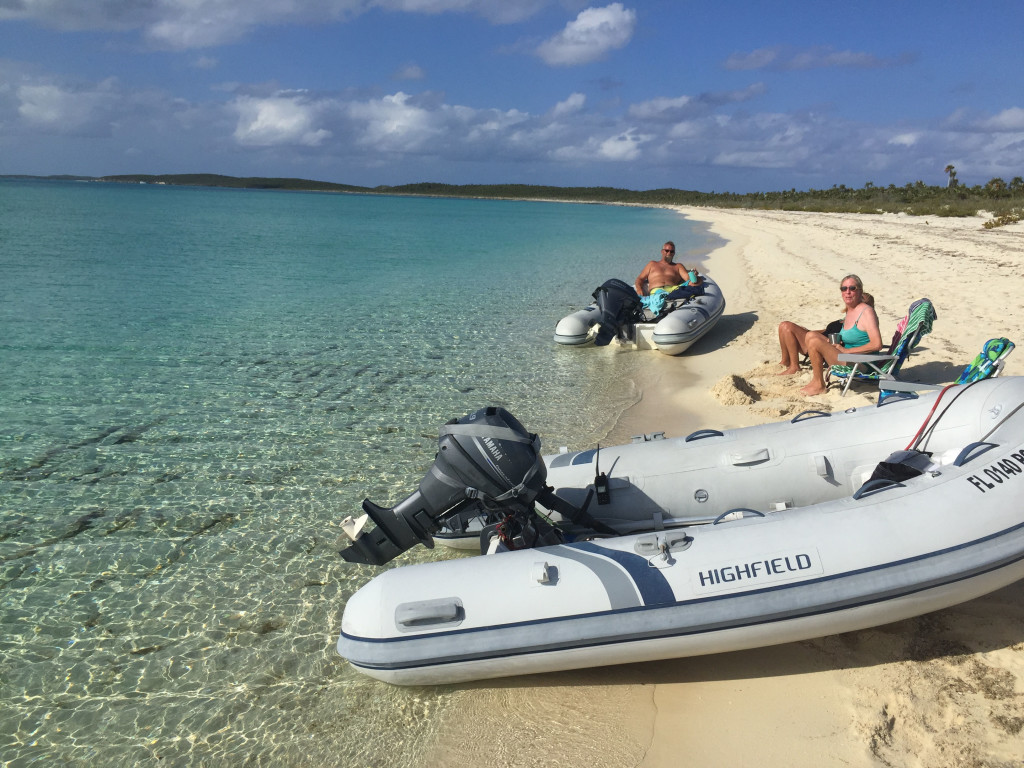 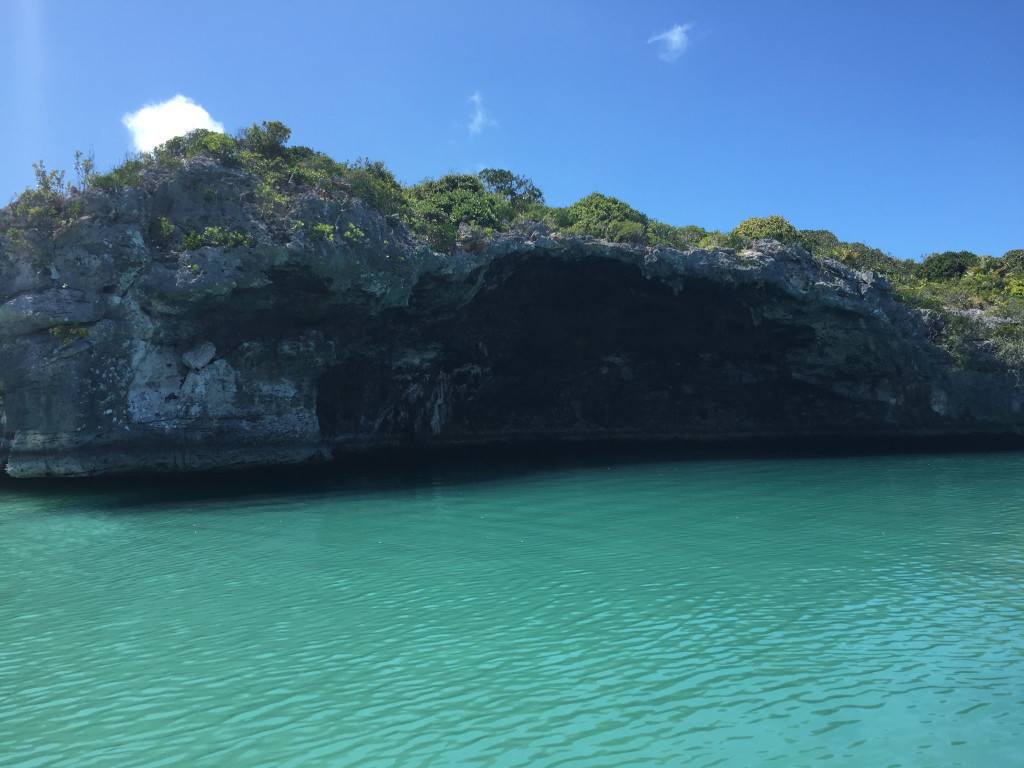 Then road down to a group of Cays owned by the magician David Copperfield. The scenery was spectacular! 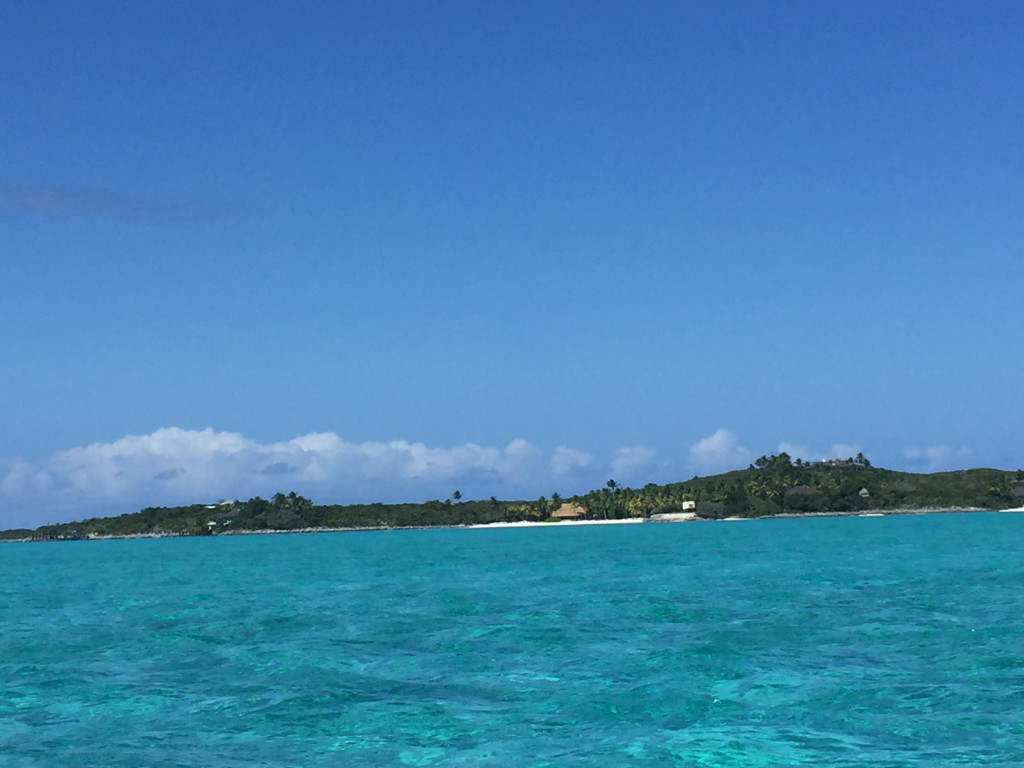 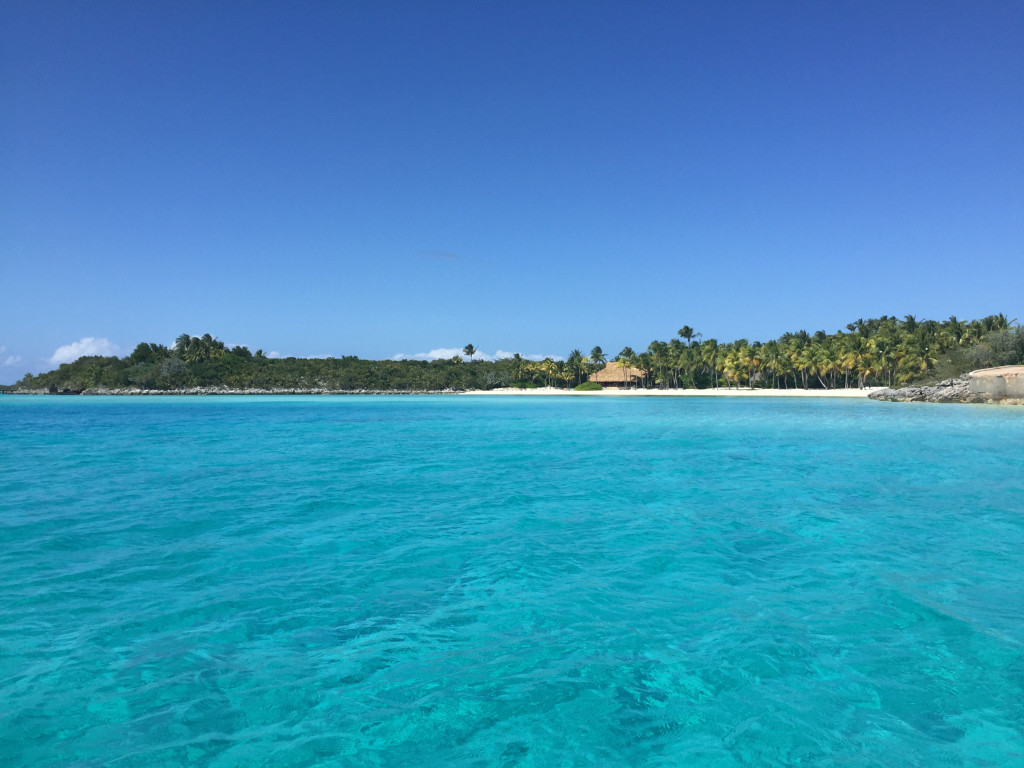 We snorkeled a spot called “the piano”, where Copperfield sunk a baby grand piano along with a mermaid sculpture:
We then returned to the anchorage and when the tide shifted in the middle of the night, it turned the boat beam to the wind, causing a really bad rolling condition. We didn’t get much sleep, and I actually started to get seasick…my first time ever. The next day we were planning to run Exuma Sound to Emerald Bay. Based on the forecast, it was the best day we had to make the run…seas 2 foot falling to around 1, with winds around 10 knots out of the east. On top of being slightly sea sick, I had a very anxious feeling about making the trip, but we were trying to get to our friends ASAP and all agreed to push on. We went out Cave Cay Cut into the sound and were greeted by 6+ foot seas in the cut, slamming us and showering us with spray. Knowing the cut would be rough we pushed through until we got into the sound. We had 15 knot winds on the nose and 3-5 footers. Every part of me was saying “you need to turn around and wait another day”, but we didn’t want to mess up plans for the other 2 boats so we kept going. Needless to say…another 6 hour ass kicking, and another inaccurate forecast. And another confirmation of the adage “don’t travel based on a schedule”. The marina was nice and calm when we finally got past their break wall, and our friends were there to greet us as we arrived, which was very cool. Since here, we have been hanging with our friends at the nice pool at their resort, had a party on Larry’s fly bridge, and had dinner and played cards 2 nights in their room. It has been a lot of fun and we are honored that they booked their vacation time to be with us. We have never stayed at this marina before. They have nice floating docks and a nice club house for people to hang out. The marina pool is closed and you have to pay 25$ at Bill and Dondi’s resort if you want to spend the day at their pool, or you can pay to have a day pass at neighboring Sandals resort. The showers at the marina are pretty run down and not very clean. They regularly don’t have toilet paper, soap and paper towels in the restrooms. There is a swell with an east wind or northeast wind that causes you to roll at the slip. On top of that, the no-see-ums have been relentless. We haven’t had more than a couple hours sleep every night since we have been here. I am not sure I would stay here again.

We are now facing more high winds in a few days, after which we have maybe 2 days of calmer winds followed by what looks like another week of 20+ knot east winds, and are trying to decide which way to go. We want to go to Long Island, Cat Island, then Eluethera, then the Abacos, then back to the States. Not sure that is possible in the time we have left and the forecast we are looking at right now. We will keep you posted.