We finally got a weather window long enough to make our way to the Exumas. The forecast was showing winds around 10 knots for a couple of days with 1-2 foot seas, all out of the south, but by noon on the third day it was going to blow up to 20 knots. Since Larry was single handing on At Ease, we knew we needed to stop for periods of rest and break the trip up into 3 days, anchoring on the Bahama Banks by the Northwest Channel on day one, stopping at Palm Cay Marina on New Providence Island for day 2, and then make the Exumas on day 3. The first 2 legs are 75 mile and 12 hour passages, and the last leg is about 45 miles to Normans Island in the Exumas. The plan was to get to Nassau Harbor by 1 PM the second day before the winds started to build, and then wait in Palm Cay Marina a few days until the winds subsided.

We shoved off on 2/24/19 at about 7:33 AM and headed south to Triangle Rocks to enter the Banks. The seas were really rough, way above the forecast, so we took an hour ass-kicking bashing into them until we got on the Banks where it was on the high side of the forecast. Winds were stronger than forecast, but we could sail so it was comfortable and fast. About 32 miles into the trip, one of the boats started taking on water! We were in the lead and immediately turned around. The three boats drifted as they tried to determine the cause and remedy. After about 30 minutes, they discovered they were not taking any more water on, but needed to get all of the water out before they could continue, which was great because we thought they might be sinking. Water was above the floor boards in the cabin and had covered the drive train, making it impossible to use the motor. Just prior to all this, the winds picked up and the seas built to 3-4 feet, hitting us every 3 seconds…not a fun sea state. Here we are in the middle of nowhere, no other boats, no Coast Guard to help…it was pretty scary. Fortunately they could sail, so we turned back toward Bimini. Cat Cay is on the way back about 20 miles away and we could get assistance there, and maybe make it back to the marina we left in South Bimini, which is what we did. Unfortunately for us, we were going to get to the marina at sunset and also at low tide. There is a rock shelf at the entrance to the marina that carries less than 5 feet at low tide, making it impossible for us to enter. The other 2 boats have a shallower draft and made it in. We motored around in bashing seas for an hour and a half waiting on tide, and by that time it was pitch black. The marina entrance is narrow and surrounded by rock jetties on each side. There is also a short dog leg to the route in. I couldn’t see anything, but I did have a track on my chart plotter that I could follow which was the plan. Unfortunately, when I zoomed into the level I needed, the track would disappear! I radioed Sofia Jeanne and Crabshack H2O (Kurt and Sharon’s new boat) and asked them to lead me in on one of their dinghies. They came out, but we had to abort the first attempt because a fishing boat was coming out of the marina shining a spotlight, blinding me completely. On the second attempt a large swell grabbed the boat at the entrance and pushed us to the right, heading for the rocks, and at the last minute I gunned the engine and pulled out of it, coming really close to a major disaster. We made it in on the second attempt, grabbed a slip, and had several strong cocktails. A really bad and scary day on the water!

Our next weather window was 4 days later. We patched up the boats and waited. This time we had a 4 day window of light winds and calm seas. We left Bimini on 2/28/19 and went about 10 miles to Honeymoon Harbor, just inside the Banks at Gun Cay. We have anchored here before and it is a cool stop…secluded beach, and this is where the stingrays come up and swim around your feet looking for food (people feed them here). We anchored in position 25 35.015N, 079 17.877W, played with the stingrays and had a very nice evening, happy to have broken the hold of Bimini.

The next day we said goodbye to Kurt and Sharon as they were heading to their condo in the Berry Islands, and we motored 68 miles to the Northwest Channel and got an anchor down behind the Northwest Shoal just before sundown in position 25 31.095N, 078 13.148W. We had dinner and drinks watching the sunset. The winds and waves picked up around 2 AM, making the boat roll and making it difficult to sleep. We had planned to leave at 3 AM so that we could get to the Palm Cay Marina before they close at 5 PM, and we departed at 3 AM. The forecast wasn’t accurate, but it was fairly comfortable motoring into the wind and seas until the last hour and a half, where it got really rough. We made it into Palm Cay Marina at 4 PM, fueled up and topped off water, and got some well needed sleep.

Sunset on the Great Bahama Banks: 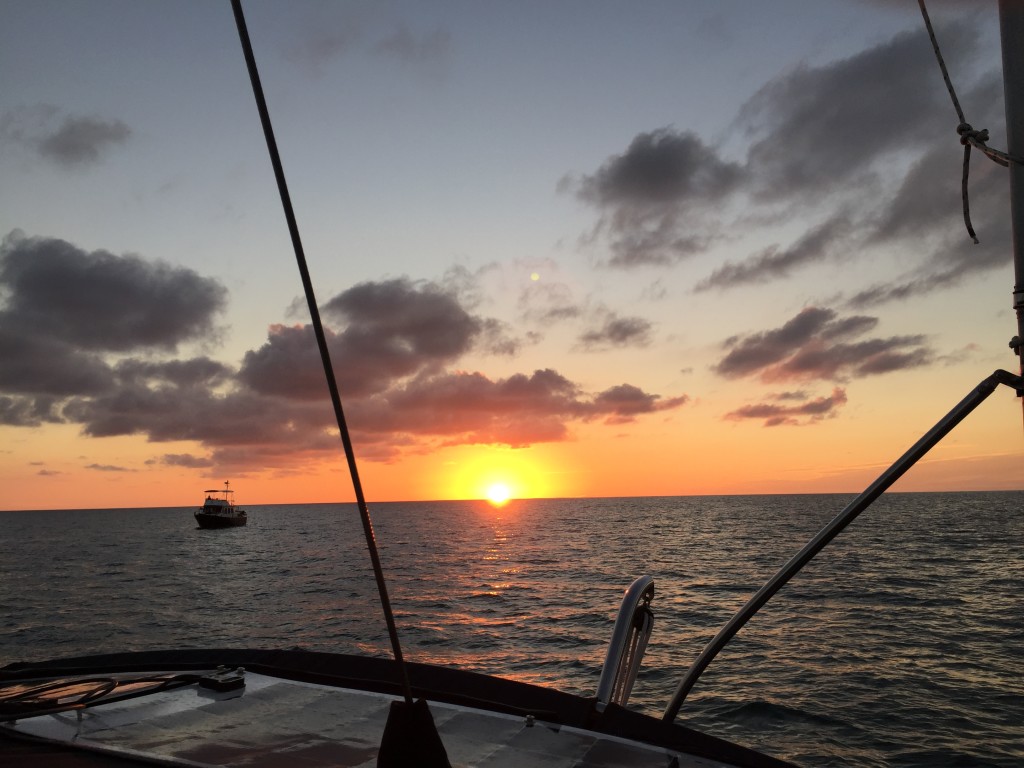