Well, we weathered the frontal system that kicked our ass for 5 days in Big Majors Spot, and we only got off the boat to go to a Full Moon Happy Hour on Cruisers Beach the day before we left. The 5 days included a lot of rocking and rolling, and not the music kind, and it was damned uncomfortable for the most part, but no one had their anchor drag in the our anchorage, so we deemed it a successful weathering of the winds. Our good friends Hayden and Radeen on Island Spirit rolled in for the Full Moon event, so we got to spend some time with them as well. It was interesting listening to everyone on the marine radio, trying to make last minute arrangements for a mooring ball or a slip in a marina. There aren’t many to be had in the Exumas, and there are very few places to hide from winds that clock through all four directions in a few days time. We stayed tucked up in the NE corner of the anchorage at Big Majors as it was only exposed to the SW and a little to the W, and the worst winds were going to be from the NW, then move N, then move E. It worked well. The following week was supposed to have 10 – 25 knot winds from the E or SE, so we decided to pick up and leave.

On 3/24 we upped anchor and sailed up to Hawksbill Cay, and spent an afternoon on another totally deserted, beautiful beach. We anchored at position 24 28.915N, 076 46.691W. The next day we sailed up to Ship Channel Cay, which has the northern most anchorage in the Exuma, anchoring at position 24 48.645N, 076 49.763W. We basically just lounged around and read. The views were beautiful. Both of those anchorages had a nasty swell that rocked us all night. In fact, we have found very few places in the Exumas where we had a comfortable anchorage, due mostly to the winds, and swells that come from a different direction than the wind. In spite of that, the Exumas were absolutely beautiful and mostly remote. When we emerged from the boat the day we left Hawksbill, we saw that mega-yacht Firefall had anchored next to us in the night.

We also saw dozens…not kidding…dozens of mega-yachts gathering at the cays around Highborne Cay, just north of Hawksbill. We were figuring maybe a spring break thing? We wanted to dinghy up and knock on the hull of one…”Pardon me, but do you have any Gray Poupon?”
Today we left at dawn and sailed to Eluethera. The first half of the 45 mile trip was with winds and seas behind us on our quarter, which was good. Then we had to turn and deal with them on our beam (side)…not good. Waves were 3-4 feet with a 2 second period and we were getting rolled around AGAIN! I had to hand steer the entire trip to minimize the unpleasant motion of the boat. Good thing was…we had strong winds and made great time, arriving in just under 5 hours. We were expecting 7 or 8 hours.
Eleuthera so far is beautiful! We expect to cruise around here for a week or so, and then head north to the Abacos for April. Our anchorage: 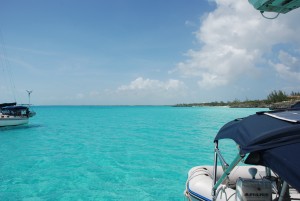 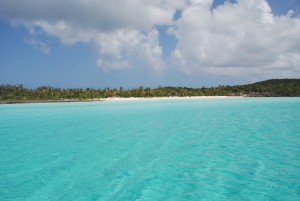