I haven’t had much time to blog lately…too many things going on. We have started the watch routine for the big window, a window of good weather to cross to the Bahamas. We usually like to have at least 2 days of decent weather to cross the Gulf Stream. This winter has brought the worst weather in a long, long time to south Florida. Lots of north winds, strong winds, and rain. Typically, these come in short spurts and maybe once a week, but this year it has been almost constant except for the rain, which has been much more frequent than normal. Everyone here and in the Bahamas is pretty much weathered in. A couple of days ago we saw a window for next Tuesday so we have been working like crazy to get everything done that we need to get done to depart. The forecast has been changing drastically every day, and the window has opened, closed, opened again, closed again, and opened again. In the last day, the forecast for next week went from 45-50 knot winds to less than 10 knots…who knows! At any rate, we need to be ready to go, so we can take advantage of a possible window. Every day, we need to ride our bikes to the grocery store to haul back what we can carry to provision the boat, and we need to get our projects completed.

In the last week we knocked a few projects off the list. One of them was putting on new solar panels. Last year we ordered 3, 135 watt panels, 2 on back order, installing 1. The ability to get the other 2 fell through, so the company we bought them from took back the 1 panel and got us 4, 100 watt panels. We figured out the best way to sew them into the bimini canvas and Tricia did her magic. 2 of them had zippers sewed into the panel, so she had to devise a way to sew the other half of the zippers into the bimini, and the other 2 we decided to do velcro since it worked so well with the one we did last year. First, Tricia made pieces of backing canvas to sew the zippers and velcro on, which would then be sewed to the bimini. 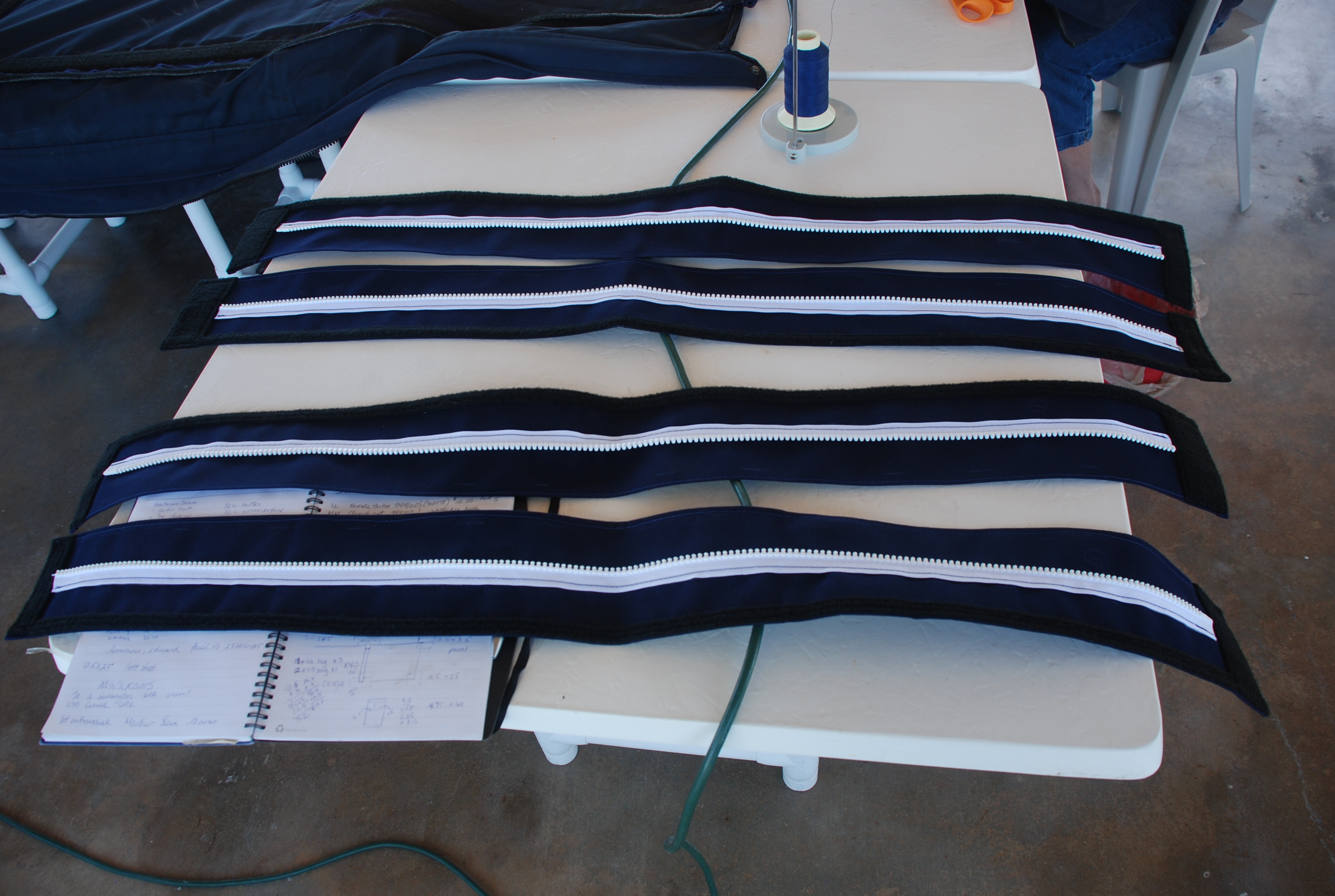 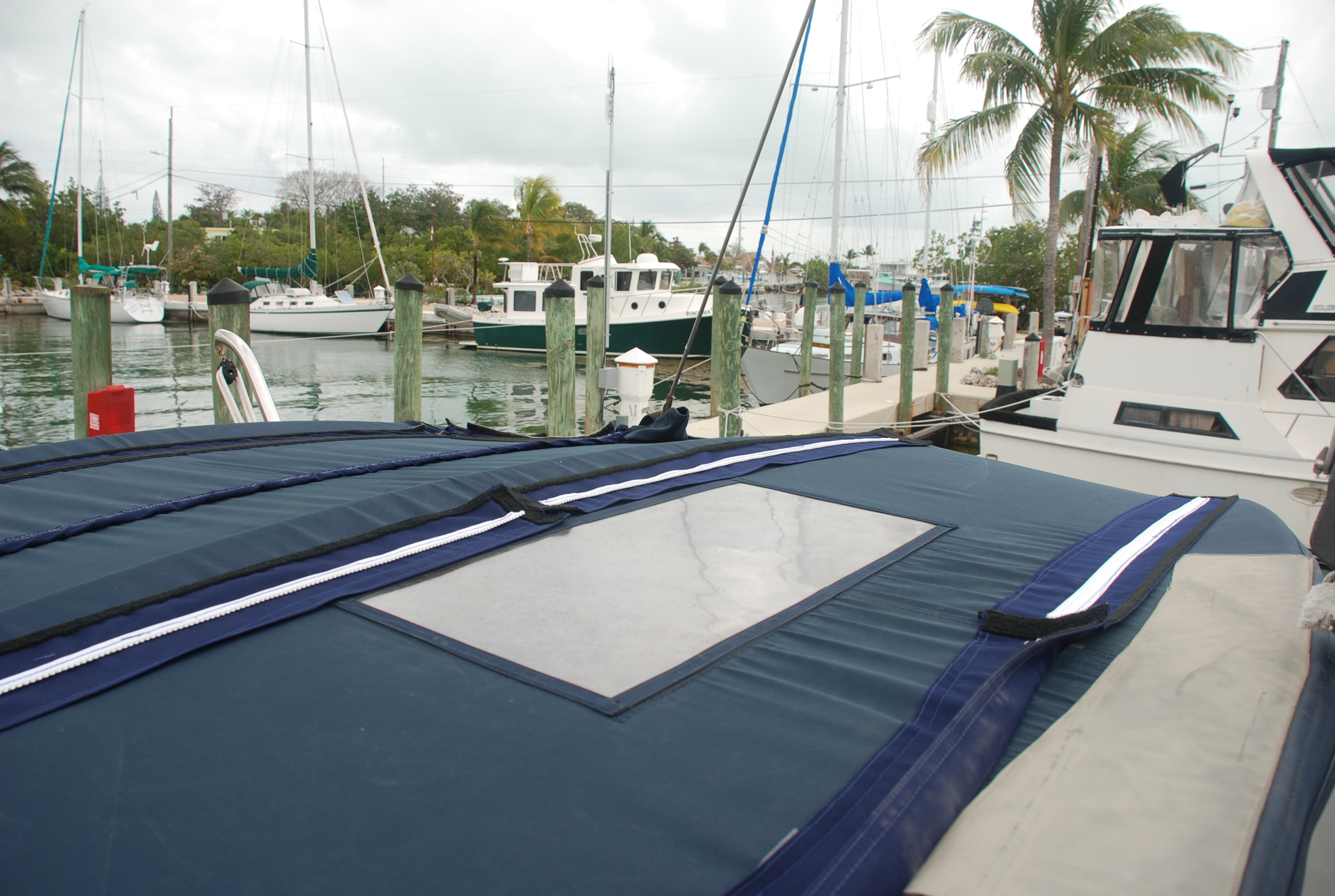 At least we had a good work area in the lanai at Harbour Cay Club! The zippers took a couple of attempts to get the alignment just right, as it changed when the bimini was installed on the boat frame, but she nailed it! It was a very tedious job because there were a lot of zippers that were part of the bimini that were in the way, and it has a lot of material to wrestle with while sewing. After 3 days of work we installed the panels: 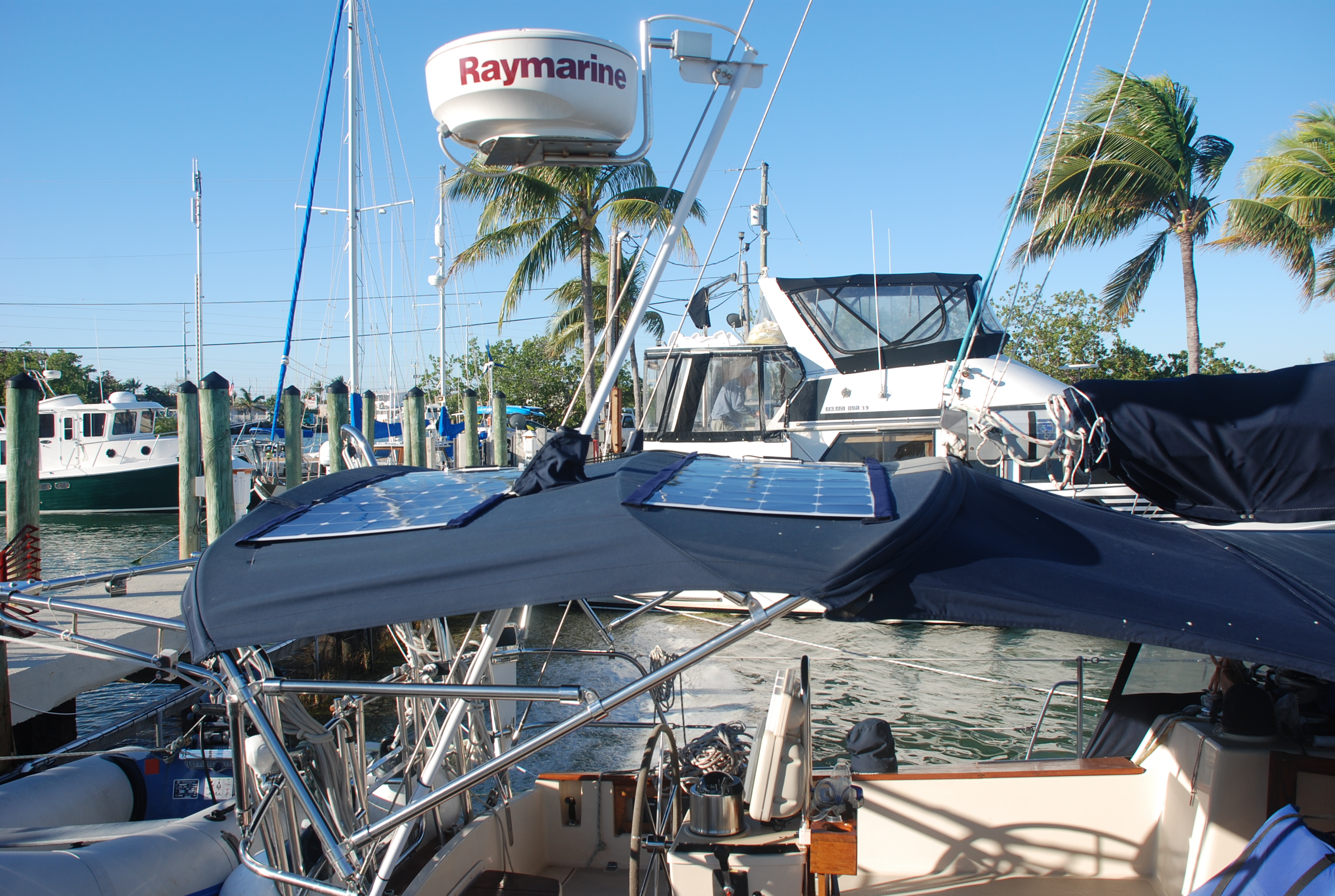 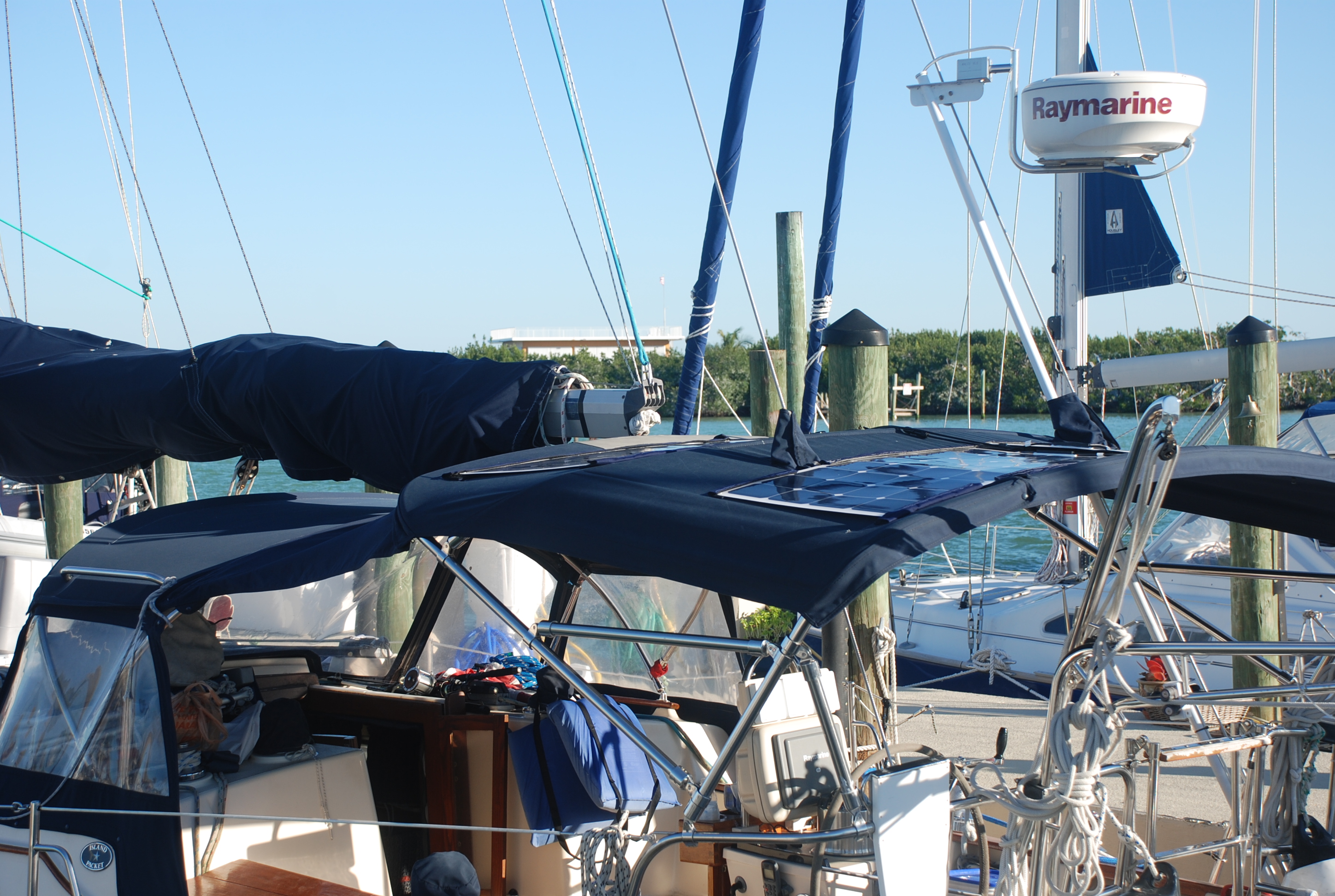 In the mean time, I set out to get the Honda generator running again. It would only run if the choke was fully open, so I knew it was not getting the proper amount of fuel. I overhauled the carb, finding the jets plugged: 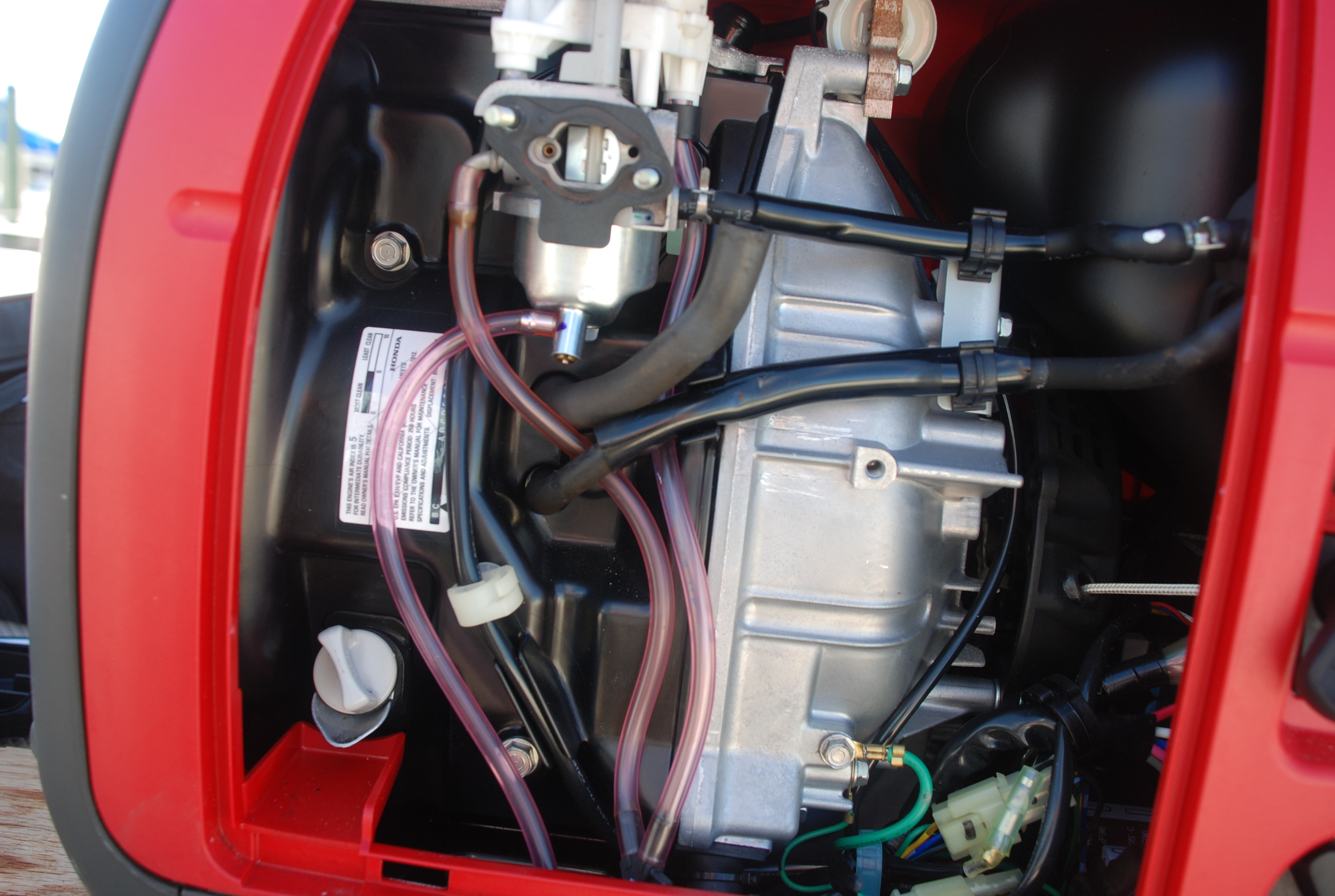 I put it back together and it wasn’t any better. Next I tore open the end of the case to get at the fuel filter…no problems there…so I broke down the carb again, finding it was plugged again! The second overhaul solved the problem and it runs great again! It only took one bike ride to Home Depot to get some carb cleaner. It took the better part of a day, but I had this view while I was working: 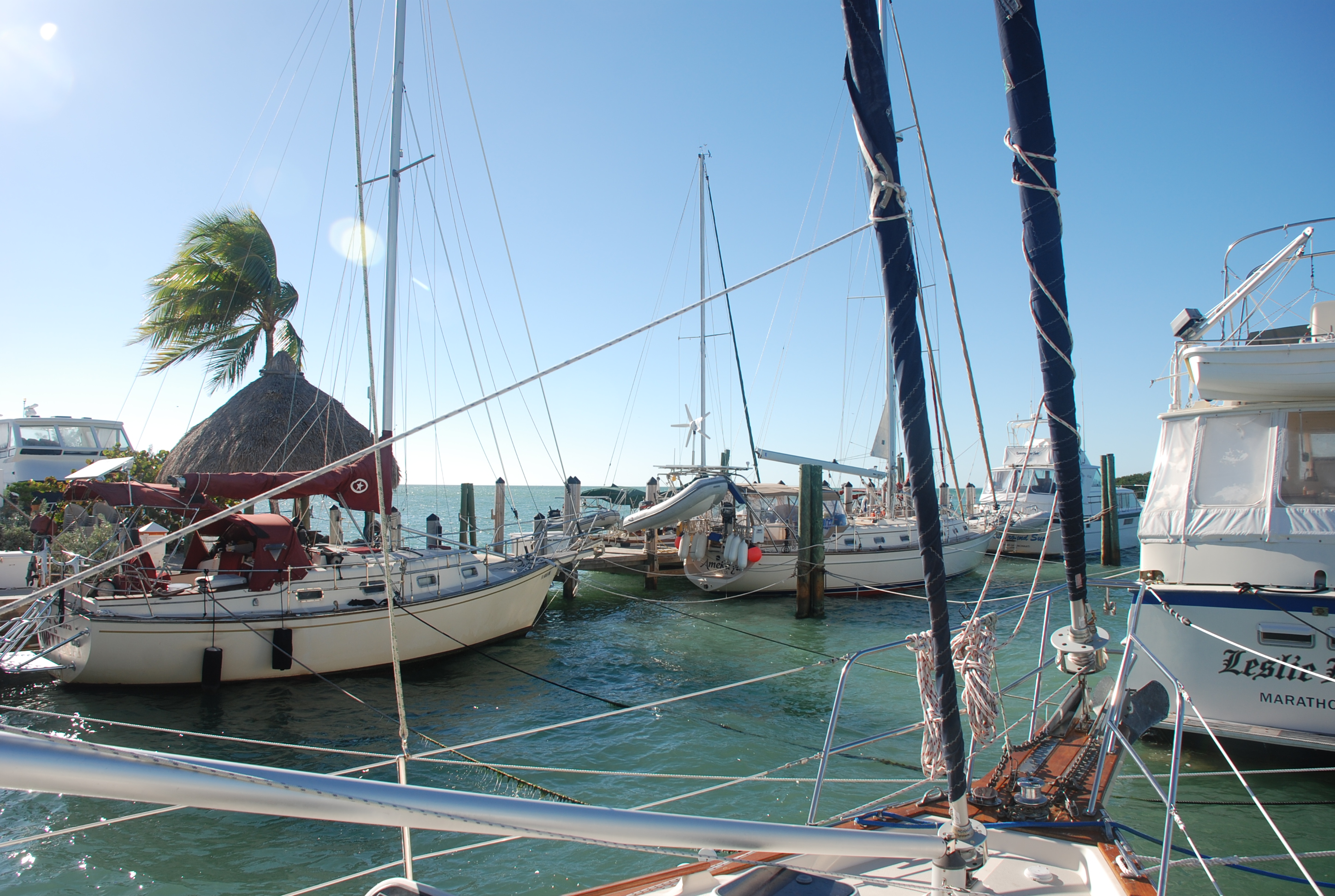 This week I also tested the macerator plumbing for leaks. The first check was opening the under water overboard discharge valve that leads to outside the boat, and I’ll be damned if the new diverter valve that I installed leaked like a sieve…not good! It was late in the day, and I just closed the overboard discharge valve, thinking it would stop leaking as soon as the water ran out of the hose. It leaked all night, meaning the overboard valve was leaking too! Really not good!! To fix the discharge valve we would need to haul the boat out. Asking our friend Mark to double check my logic, we decided to pull the hose off of it and put things back the way they were before the macerator work, and we discovered that the overboard valve did not seal completely, but it was a very small drip…something that could be contained if the diverter valve was fixed. We could then fix the overboard valve the next time we hauled the boat for a bottom paint job. I took the diverter valve apart and found that an O-ring was not seated properly and pinched, then spent the better part of a day riding around looking for a new one to no avail. The next day, I figured I could try to seat the existing O-ring properly, reassemble the valve, and try it again…no leak…yay! I let it sit for a day to make sure it didn’t leak and reinstalled the hoses, and today I will check out the rest of the plumbing.

We spent some time with Matt, Shirley, Kurt, Sharon, and the moms over the week; but Matt and Shirley left today to head back home. So sad! It was great getting together. We also had breakfast with our friends from Columbus, Dave and Cindi, and Cindi’s parents. Dave and Cindi are here for a week, then back to Arizona until the weather improves in Columbus. Now back to our rush to get ready to leave. As it looks now, we will be leaving next week.